Home / economy / Western industry is starting to escape from China

Western industry is starting to escape from China 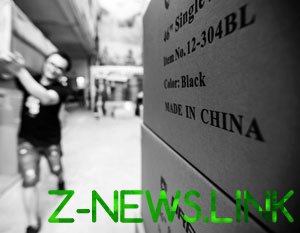 True tectonic shifts taking place in the global industry due to the coronavirus. The pandemic has spurred major Western corporations to abandon the policy which they have followed for the last few decades – placing production in China. That was the reason, in addition to coronavirus, and where it will go from China factories?

Pandemic coronavirus to the surprise of many powerful States, the first issues of the world economy, showed that in essence, they are colossi with feet of clay. It turned out that their economy is multi-trillion GDP in direct dependence on a single state, more recently, with disdain called a third world country. In the governments economic giants talked about moving production facilities from China back home.

The first alarm sounded the USA, which in February 2020 suddenly found that the outbreak of the coronavirus in China, will leave America’s side: 97% of antibiotics consumed by the population of the States comes from China. And 80% of pharmaceutical ingredients for the production of drugs – from the same place. The first bad news was followed by a second: personal protective equipment (masks, gowns, Shoe covers, respirators, etc.), it turns out, most of them are made in China too. “If you were Chinese and really want to destroy us, just stop sending us antibiotics,” commented the news a former economic adviser to US President Gary Cohn.

After the States of its dependence on China found Japan, UK, South Korea, Germany, France, Spain… And it concerns not only tablets, but also other vital sectors. For the past three-four decades the Western world in the pursuit of profit transferred their industry to China. Working hands were worth a penny, and the taxes levied by the authorities is quite divine in comparison with American, Japanese and European.

Now the clever heads in the Western governments realized that they had made a huge mistake, and immediately decided to diversify their production locations vital products. But it turned out that this will be a big problem.

Some large companies (Apple, Sony, Google, etc) understanding of the need to move factories from China came and without prompting governments. However, the opinion of business leaders with the views of the authorities coincide not completely.

How much is it back home?

To withdraw some of its facilities from China Google, Apple and other Microsoft’s agreed. But no return to America it was not. Why, if there are Vietnam and Thailand, where draconian taxes will not name, working hands cost “a dime a dozen”? And are these States in two steps from the middle Kingdom, that is, the costs of transportation of equipment will be much smaller than drag everything across the ocean.

It is possible that the executives of these firms understand that they themselves organize a brilliant opportunity to step on the same rake again, but… Order no tramp they can’t, words about the public interest the patriotism of the sharks of capitalism is not to Wake up – everything will depend on money, money and nothing but money.

Estimated senior researcher of the Institute of financial studies at the Renmin University Liu Tsikina, given Chinese Global Times, “to return home to the US companies and Japan would agree only if governments are ready to pay not only the dismantling of machinery, its transfer to a new location and install it.” Might need the construction of new buildings, and most importantly – compensation for financial losses. Cikin believes that “the owners of the business are well aware: when leaving China, they lose the most capacious market in the world – China, which does not replace. While will last relocation and settlement in a new place, competitors will not slumber and will press the “settlers” and, snatching from them a piece of the pie”.

Analysts believe that to persuade large enterprises to return (at least in the US and Japan) governments will “more than compensate for all the expenses plus projected profit for the next three years”. “The U.S. calls for the transfer of production from China is not news. Since joining Donald trump in the office of the President, his administration never stopped campaigning for it, but few have responded,” says a Chinese expert.

In the words of Liu Zikina impossible not to notice a light discontent: of course, China will not be big problems to fill the vacuum that will arise with the departure of whales. Its specialists have prepared the Chinese, the wrong technology mastered. Yes, and its scientific personnel are available. Still, the departure of Western companies is the loss of jobs, which in itself is unpleasant, and in a moment of crisis in particular. Therefore, the analyst resorts to a discreet blackmail, warning: guys, if you are from China will go back we will not let you. On the market in almost half a billion consumers.

And they still go, come-then, when China was a third world country whose people are willing to work for a bowl of soup. Now China is a superpower, dictating its own conditions, which are not always without contradictions with the interests of the United States, Japan, the UK, governments are the market giants still have to look. Why choose the leading figures of “balanced solutions”: Yes, from China “have fell”, but not home where expensive, and in small countries where cheap and (so far) without the authoritarian guidance.

Vietnam is the new China

“Apple, Google and Microsoft for several months, slowly moving from China to Vietnam and Thailand, but the coronavirus seems to have accelerated this trend. Added to this are the rising production costs, demand and fear of a new trade war between the US and China,” according to Japanese publication Nikki Asian Review.

“South Korea’s Samsung moved to Vietnam in 2014 to save resources. Other companies working in the sphere of high technologies, follow her example. The upcoming flagship product of Google and Microsoft, such as Pixel 4A and the new Surface will come on the world market of these two countries in the second half of the year,” says the American edition of Business Insider. According to estimates of the correspondent of the publication Luis Casale, the company will end up to be totally separated from China by mid-2021.

Casal recalls that “the coronavirus has hit sales of “Apple”, which in the first quarter of the current year the company fell by $100 billion.” The loss of solid, but the economists of the administration, trump acknowledged that a trade war over this same period reduced the expected annual gross state product by 1%.

Pandemic – a temporary phenomenon. But a trade war will not soon be over – and it is understood the farm, Tim cook, and therefore decided it was better to leave China out of harm’s way.

The Japanese government has already agreed to help their companies move out of China. The Cabinet of Shinzo Abe has pledged 240 billion yen ($2.2 billion) in compensation for the costs of relocation. It was stressed that the lion’s share of the amount (220 billion yen) is for those companies that transferred their manufacturing to the homeland. Those who wish to move to any other country will get crumbs.

However, the Japanese giants like Sharp home in a hurry, and as a new haven consider all the same Vietnam. The February survey Tokyo Shoko Research showed that 37% of the more than 2600 companies with production in China, are engaged in finding suitable countries for the transfer of the business in their territory or are moving.

Analyst Bloomberg’s Isabel Reynolds very carefully assesses beginning of “escape from China”. In her opinion, it is not clear that it would be better for international relations as a whole: to leave the Western production in China and thereby stimulate the development of the economy of the Asian giant or to deduce from it the corporations of USA, Japan and others and to quarrel with Beijing.