Home / INCREDIBLE / Found evidence of the existence of a magnetic monopole

Found evidence of the existence of a magnetic monopole 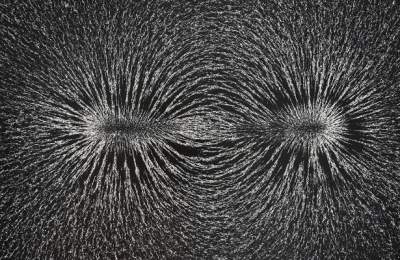 The magnetic monopole can exist not only as a mathematical abstraction.

Scientists have discovered traces of a magnetic monopole — the magnetic field source, the existence of which denies modern physics. The study is published in the journal Science.

Electric and magnetic components of the electromagnetic field are described by similar equations, but behave differently. For example, an electric charge (electron) exists, but the magnetic — no. That is, the electric field can be created by a single “pole” (a monopole), and a magnetic is created only by a pair of poles, North and South (dipole). This picture describes the main the world of electromagnetism with Maxwell’s equations and confirmed by numerous experiments.

Despite this, there are several hypotheses, which assume that the magnetic monopole (the analogue of the electron is an electric monopole) does exist. They are described only mathematically and is rather hypothetical, no real physical evidence of the existence of a magnetic monopole no. Moreover, if he did find would have to rewrite the equations of Maxwell, and with them the whole theory of electromagnetism.

The results of a recent study by American scientists showed that a magnetic monopole can exist not only as a mathematical abstraction. For their experiments they used a quantum gas, unlike conventional gas, the particles are indistinguishable from each other. Typical quantum gas is the electrons in the metal lattice). Because of this property, the pressure and temperature of the gas described by the equations of quantum statistics, and not the usual molecular physics. Typically, the quantum gas is obtained by cooling atoms to temperatures close to absolute zero. In this state, the atoms are almost stationary and they are easy to learn.

The study authors subjected to a quantum gas of radio and microwave irradiation. Changing the parameters of this radiation, scientists were able to change the internal magnetic characteristic of the atoms spin, which can be compared with the magnetic arrow of the compass. Physics was consistently unfaithful to spin nearly stationary atoms among all possible values, i.e. forced him to do one “full rotation”. However, at the end of the experiment, the spin back to its original state and is slightly deviated from it. This deviation scientists explain it by the influence of a magnetic monopole. To rule out other possible interference, the scientists repeated the experiment, but this time eliminated the effect of hypothetical monopole. In this case, the spin of the atoms returned to its original shape without any distortion.