Home / Medicine / Doctors told how to overcome a hangover at home

Doctors told how to overcome a hangover at home 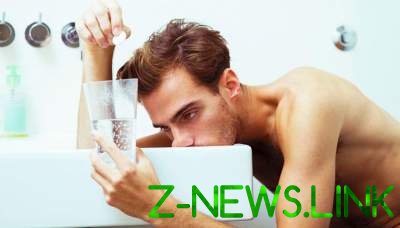 According to statistics, 50% of people who drink alcohol, occasionally experiencing a hangover is alcohol poisoning, which impairs the functioning of the whole organism. Often people in this condition need immediate help and support.

Before talking about the consequences of alcohol poisoning, it is worth Recalling that in the human body has a special system of detoxification which cleanses the body of toxins. This system presents a cooperative activity of the immune system, liver and excretory organs: kidneys, gastrointestinal tract, lungs and skin. Last excrete toxic substances. System detox starts the process of biotransformation (conversion) of toxins that result in the formation of less toxic substances that are easily excreted from the body.

Unfortunately, there is another way of transformation of foreign substances – so-called “lethal synthesis”. As a result of decomposition of substances such as methyl, ethyl alcohols, ethylene glycol, organophosphate compounds, the formation of more toxic metabolites, which, in fact, imply toxicity. For example, in cases of poisoning with ethyl alcohol, as a result of its biotransformation produces acetaldehyde, which is 10 times more toxic than the alcohol.

The symptoms of a hangover

A hangover is considered to be the number of subjectively unpleasant feelings or symptoms that arise a few hours or on the next day after drinking alcohol.

Increased excretion of urine, violation of the chair;

Sharp mental perception of the environment, the trembling of the limbs, irritability;

Eye redness, sensitivity to light and noise, loss of appetite;

Depression, can cover the so-called “adrenaline longing” – a sense of guilt, the feeling that eve did something inappropriate and wrong.

The causes of hangover

This situation usually arises in the case of the use of alcohol at doses much higher than the individual ability of a person to oxidize all the alcohol. This provokes the accumulation of toxic acetaldehyde.

By its interaction with dopamine and norepinephrine are formed tetrahydrozoline, and tryptophan – CARBONYLS. These substances have hallucinogenic and psychotropic activity. Acetaldehyde in large doses causing loss of consciousness, sensitivity and motor activity. Thus, a hangover is nothing as poisoning acetaldehyde.

The type of used beverage (cognac, brandy, whiskey, gin, tequila, moonshine, etc.) does not affect the severity of hangover. Here has a value exceeding a threshold dose. It is believed that the critical dose in the risk of a hangover in healthy people is 1 gram of ethyl alcohol per 1 kg of body weight.

So, for an adult male, weighing 80 kilograms, the dose risk is 80 milliliters of pure ethanol or 200 ml of vodka.

Psychologist Victoria Skuratov: “the use of alcohol can cause exacerbation of chronic diseases such as: chronic pancreatitis, chronic cholecystitis, chronic gastritis, chronic gastroduodenitis, peptic ulcer and others. Alcohol bad for kidney function, so if a history of renal disease, you should consume alcohol with greater caution.”

How to drink to avoid hangover

Is it possible to avoid such a state? . Is not to drink alcohol and to prevent poisoning, as well as those unpleasant feelings associated with a hangover. When you drink alcohol, you must be aware of the critical dose for the occurrence of the hangover and the individual measure that is desirable to share at the party.

It is also important to observe the following rules:

To afford every toast to take one SIP of alcohol.

Do not mix different drinks (champagne and whiskey, vodka, wine and beer).

Mandatory snack before and after alcohol.

Not to forget to interrupt dinner to stay in the fresh air, for active movement and communication.

Associate Professor Sergey akentiev: “Main: meals and alcohol consumption is not an end in itself, this is not the way to poison yourself, but a way of the civilized, cultural pastime in the team. Experienced recommended before drinking alcohol, to eat one teaspoon of butter with one egg. It will protect you from rapid intoxication”.

Spirits less likely to cause a hangover. It often cause sugary drinks, shakes and more. Fusel oil contained in the brew, a dark beer, tequila, whiskey, also contribute to the hangover. You should never mix different drinks and drink alcohol soda.

Psychiatrist Oleg Strashok: “Also of great importance is the General condition of the body and the opportunity to relax, to sleep. If this is not possible, avoid drinking alcoholic beverages. We should also refrain from drinking if there is a bad feeling, a painful condition. It is strictly forbidden to consume alcohol in the baths and saunas”.

How to get rid of a hangover

In case of any symptoms of a hangover, the pain during a hangover can weaken acetylsalicylic acid: “upsarin UPSA”, “Aspirin.” But in large quantities, they can not be consumed, as may occur with peptic ulcer bleeding. In addition, the overdose contributes to the development of dizziness, nausea, stomach pain, and decreased visual acuity and hearing.

Will not be more than the use of conventional activated carbon (5-7 tablets) or other absorbents (“Enterosgel”, “APSCO”). To improve the emotional state and brain activity will help the drugs “Glycine” or “Phosphogliv”.

In case of nausea and urge to vomit, it is better not to restrain themselves and to empty the stomach. It is strictly forbidden to deal with a hangover with alcohol. This will only worsen the condition.

The optimum is to limit activity, preferably in the sleep state. In the presence of a hungover thirst instead of plain water the preference for the use of cabbage or cucumber pickle, who find optimally balanced solutions of salts of potassium and sodium. It promotes the flow of redox reactions in the liver.

Associate Professor Sergey akentiev: “an Effective means of alleviating hangovers are pomegranate or Apple juice, honey, dissolved in water, with lemon. Plain water can be consumed 3-5 pills “Asparkam” or “Panangin” to regulate the content of potassium and magnesium. Also one of the simple tools may be weak soda solution (half spoon baking soda in a glass of water), which normalizes the shift of acid-alkaline balance. It is useful to use milk or yogurt for binding and termination of the absorption of toxins that accumulate in the gut, or replace the meat broth”.

Traditional strong coffee and tea can worsen the condition of a hangover, causing complications in the cardiovascular system (the syndrome of “holiday heart”). Therefore, the use of stimulating drinks is strictly prohibited.

Psychologist Victoria Skuratov: “first, we need to listen to their desires. If a person wants to sleep, need to sleep; if a person is hungry we should eat, but if you do not want to, then force yourself not necessary. Secondly, they need to stick to a diet. Exclude: fried, spicy, fatty, salty. It should be vegetables or meat steamed, porridge, diet soups. Thirdly, you should drink plenty of water. Ideal table water, such as “Polyana Kvasova”, “Borjomi”. The water will help remove toxicity and reduce dehydration”.

We emphasize that the lethal dose of alcohol is between 4 and 12 grams per kilogram (average of 300 ml of 96% ethanol in the absence of tolerance to it). Alcoholic coma develops when the concentration of ethyl alcohol in the blood of about 3 ppm and a lethal concentration is 5-6 ppm.