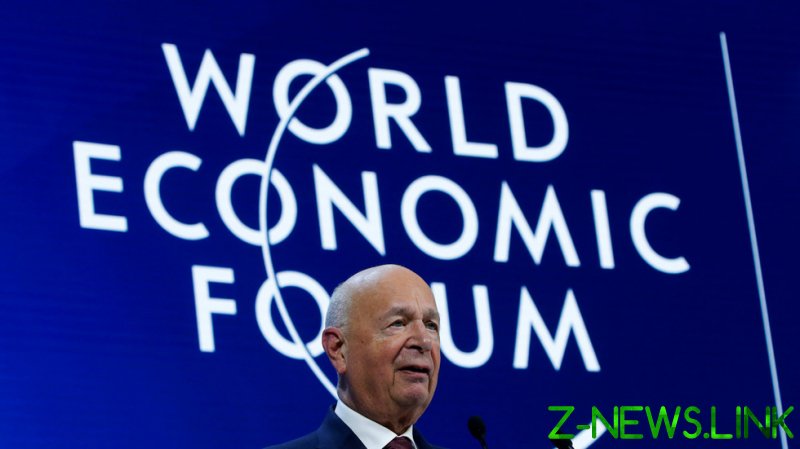 A video accompanying the Friday tweet by the WEF shows images of deserted streets, grounded airliners and idled factories, then notes record declines in air pollution and a drop in carbon emissions. It later shows busy, smog-choked highways and notes that “the drop won’t slow climate change unless we lock in emissions cuts.”

The tone-deaf tweet – coming amid millions of Covid-19 deaths and countless lives and businesses being destroyed by lockdowns – was quickly ratioed by Twitter users. The WEF’s comments and linked article about the historic quietness brought on by lockdowns leading to better detection of small earthquakes were lost on most observers, who focused instead on the group’s apparent affection for a dystopian, depopulated world.

Podcast host Dave Rubin made the WEF’s tweet an answer to a question: “Siri, does evil really exist, and if so, can you show me in video form?”

READ MORE: What to do post-Covid? Deprived of routine, Americans haven’t a clue… and the Great Resetters couldn’t be happier

UK radio host Julia Hartley-Brewer called the WEF’s messaging “genuinely scary” and said it suggested that “human beings are the problem.” She added, “The WEF are absolutely stark staring insane if they think lockdowns are ‘quietly improving’ our cities.” Historian Roger Moorhouse chalked the post up to “anthropophobia” – fear of humans.

Canadian taxpayer-advocacy activist Kris Sims said the WEF is “reveling in a year’s worth of human misery. This open misanthropy is very illuminating if nothing else. My planet includes happy, busy, healthy, prosperous humans.” Irish author Melanie Murphy agreed, saying, “Yeah, it was so quiet I could actually hear all the devastation. Nothing to celebrate about a beehive without any bees.”

The WEF became a lightning rod for controversy in the past year as the elitist group’s founder, Klaus Schwab, seized on the Covid-19 pandemic as a “narrow window of opportunity to reflect, reimagine and reset our world.” Schwab advocates a “reset of our economic and social foundations,” which would involve more globalized governments, building greener infrastructure and reforming capitalism in pursuit of more “equitable outcomes.”

Conspiracy theorists, however, were back at it on Friday, suggesting that the lockdowns were just a table-setter for shutting down economies in the name of fighting climate change.

“Isn’t it lovely to see all these quiet, dead cities, closed factories and grounded aircraft,” lawyer Francis Hoar said. “Take this as a warning that if lockdowns are accepted in any circumstance, they will be imposed for climate reasons before long. Lockdowns should be prohibited in any circumstances.”