Turkish archaeologists have found a statue of the Roman Emperor 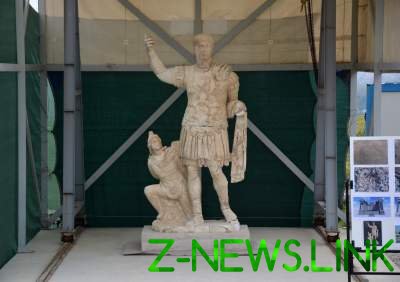 The sculpture was destroyed by an earthquake.

Excavations were conducted in the ancient city Laodikeia. Three-meter sculpture was created in the year 113, during the life of the Emperor. Perhaps the sculptor personally saw Trajan. The tunic and armor of the Emperor carefully designed. On the armor in the upper part depicts the God of sky and thunder Jupiter, and in the Central part of the Gorgon Medusa. Also on the armor depicts two griffins, the symbols of the God Apollo.

Perhaps it suggests that the Emperor was a patron of the arts. Another interesting detail: the armor depicts a bowl of water. According to experts, the statue was created in deference to the Emperor, donated 30 thousand denarii to the construction of the water system. The statue was restored from 356 parts, which lay on the site of an ancient fountain.

Most likely, the sculpture was destroyed by an earthquake. Next to the figure of the Emperor is less a major figure, depicting an enemy soldier with bound hands behind his back.