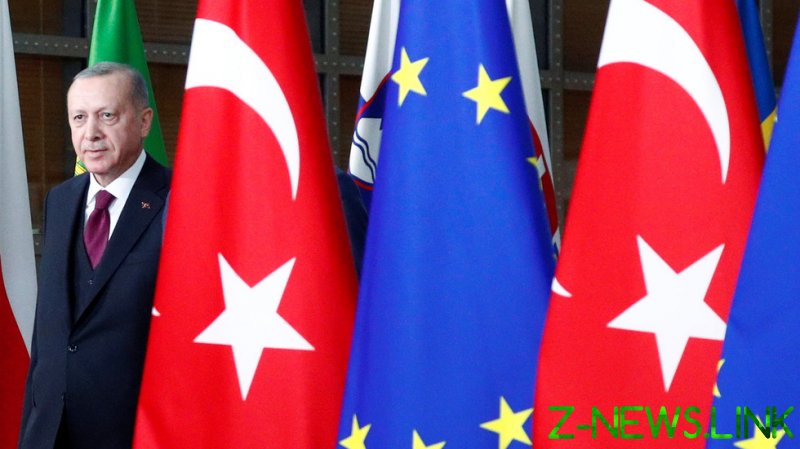 “We see ourselves as an inseparable part of Europe… However, this does not mean that we will bow down to overt attacks to our country and nation, veiled injustices, and double standards,” Erdogan said on Sunday as he addressed members of his ruling Justice and Development (AK) party via a video link.

The president also called upon the EU to keep its promises and, ultimately, make the country a fully fledged member of the bloc. The statement echoed remarks Erdogan made on Saturday, when he claimed Turkey aims to “build our future with Europe.”

Erdogan’s call appears to be both bold and far from reality, however, given the gradually worsening relations between Ankara and Brussels – and open hostility between Turkey and certain EU member states.

The country’s EU membership bid, launched by Ankara in late 1980s, was reinvigorated in the early years of Erdogan’s rule. Still, the process has long been stalled as the country has failed to meet the bloc’s requirements, particularly in the fields of human rights and rule of law.

Turkey’s recent activities in the Eastern Mediterranean, where it explored waters also claimed by Greece and Cyprus for oil and gas, has put further dents on the already battered relations with the EU. Earlier this month, EU foreign policy chief Josep Borrell explicitly warned that Turkey’s rhetoric and behavior has been “widening its separation” from the bloc.

Erdogan has also managed to get into a bitter personal row with the leader of one of the largest EU countries, France. French leaders, including President Emmanuel Macron, have ramped up their rhetoric and vowed to weed out Islamic extremism following the recent series of deadly and gruesome terrorist attacks across the country. Turkey’s president, meanwhile, has repeatedly lashed out at his French counterpart, questioning his “mental health” over Paris’ stance on Islam, and even openly calling upon fellow Turks to boycott French goods.