Scientists called the oldest planet of the Solar system 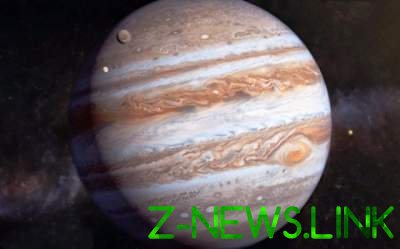 The researchers conducted a large-scale investigation of all the planets in the system.

On the background of the rest of the gas giant Jupiter formed very quickly. In the last published issue of the journal Proceedings of the National Academy of Sciences, scientists reported that the solid core of the planet formed less than a million years after the appearance of the Solar system. For the next 2-3 million years and its mass was 50 times the mass of the Earth.

The researchers previously created a computer model of the birth of Jupiter, however, the new work – “this is the first case when the model was created using the actual data that we already know about this planet,” said study co-author Thomas Kruger, researcher at Lawrence Livermore national laboratory (California, USA). To create the most reliable model, the experts conducted the analysis of extraterrestrial material that fell to Earth in ancient meteorites.

Our Solar system started its life in the dust disk about 4.6 billion years ago. Among the planets first appeared gas giants, and then began to form solid planets like Earth. The biggest planet in the solar system is the Jupiter.

Despite the fact that the basis of its mass is gas, the planet is 300 times more massive than Earth. And the fact that the planet was able to gather more material compared to other, younger neighbors, gave scientists the idea that Jupiter is the oldest of them. And new research has only reinforced these assumptions.

When Jupiter appeared, growing planet began to attract gas and dust circling around the Sun. Gas giant acted and continues to act as a shield for the inner region of the Solar system, protecting the other planets from the myriad of meteorites. When the age system was about 1 million years, Jupiter’s gravity was already powerful enough to not skip the space rocks through its orbit. The planet acted as a kind of “enforcer,” not missing a potential hooligans in the “private club,” say the researchers.

“Approximately 1 million years Jupiter has become so big it actually blocked the access from the external boundaries to the inner Solar system,” says Brandon Johnson, a planetary scientist at brown University, not involved in the new study.

When the Solar system reached the age of about 4 million years, the mass of Jupiter by that time, 50 times the mass of Earth. Its orbit was closer to the Sun, that opened access to asteroids from the outer system boundaries to the inside. Now these space rocks form a single belt, located between Jupiter and Mars. A few rocks in the end fell to the Ground, where such scholars as Kruger were able to study them.

The results of the study confirm the previously expressed opinion that Jupiter could temporarily divide existing in the Solar system meteorites into two “camps”: those that are between the Jupiter and Sun, and all the others that are behind Jupiter.

Drop both of them (from both internal and external boundaries of the system) in your garden, you would, most likely, they have not found any differences. However, Kruger and his team have the opportunity to analyse the specific chemical signatures of meteors, through which you can not only find out the age of the latter, but also to know which of these two groups belonged to one or another stone. Says Kruger, the development of technology has only recently allowed us to carry out the analysis at this level.

According to the analysis, meteorites are divided into two groups after about 1 million years after the formation of the Solar system and were in such conditions until about the time the system knocked 4 million years. That is, in the system for several million years at the same time, there were two clusters of meteorites.

“It wasn’t the usual temporary change. It was a full spatial separation,” says Kruyer.

Something had to keep them separated for such a long time. And this “something”, according to the authors of the study, most likely, was the young Jupiter.

“It is unlikely that it was something else,” adds Kruger.

“This is a very interesting work giving very interesting results, in good agreement with our current ideas about the history of the Solar system. Most likely, all it was,” commented the work of researchers Konstantin Batygin, a planetary astrophysicist at Caltech, did not participate in the study.

Batygin compares the planetary community with the detectives. And those and others are investigating the scene to search for the remaining clues on what actually happened.

“Sometimes at the scene of a tiny drop of blood on the ceiling can tell you much more than severed limbs,” says Batygin.

According to this analogy, the planets are those of the limbs, while the meteorites drop of blood. But, as the evidence, the scientist adds, there is always room for doubt.

For example, according to the astronomer of South-Eastern research Institute of Colorado Kevin Walsh, things could be very different. At that time, the structure of protodice Solar system could divide meteorites into groups.

“The key point that distinguish the authors of the study, is that Jupiter first was formed, to be able to keep the meteorite field separate from each other,” adds Walsh.

“Although one does not exclude the possibility that we simply do not understand the distribution of meteorites and asteroids in the early Solar system and a planet the mass of Jupiter in fact, could not play such a significant role in all this?”

However, a new study has proved the earlier ideas about the young Solar system and in particular the evolution of Jupiter. For example, according to one of them, called hypothesis, large deviations, Jupiter began to change orbit in the early history of the Solar system, and the first planet closer to the Sun, and then began to move away from the sun — like tacking a yacht (hence the name, taken from the sailing). The idea was proposed by Walsh and was supported by other scientists in 2011.

The attraction to the Sun could happen exactly to the moment until it formed a Saturn, which began to pull Jupiter back from the sun. This constriction, in turn, could cause groups of meteorites in a single zone. Moreover, according to some scientists, young and massive Jupiter may be the explanation for why our Land was relatively small and has a relatively thin atmosphere.

“From the galactic point of view, we are inhabitants of a very strange planet,” says Batygin.

Scientific data indicate that the Earth came from the solar nebula after about 100 million years after the formation of the system and to this point has had too little gravity, “to grow rich in hydrogen and helium atmosphere”, usually seen on other worlds. Thanks for this you need the Jupiter, which had literally sucked most of this stuff yourself.

Hunters of exoplanets, observing other star systems, found several super-earths – planets larger than Earth but smaller than gas giants such as Neptune. A few of these exoplanets more Land only twice and are in the habitable zones of their stars. According to Kruyer, the reason why our Solar system is devoid of super-earths, consists of Jupiter and its impact.

“Even in its infancy Jupiter had a major impact on the dynamics and evolution of the Solar system. Despite the fact that this influence has now decreased, he was not completely lost. Never in a million years Jupiter will play an important role in how will look like our system,” agrees Johnson.