Home / WORLD / ‘Russia is not going to join NATO’, FM Lavrov quips before private meeting with head of US-led bloc Stoltenberg at UN in New York

‘Russia is not going to join NATO’, FM Lavrov quips before private meeting with head of US-led bloc Stoltenberg at UN in New York 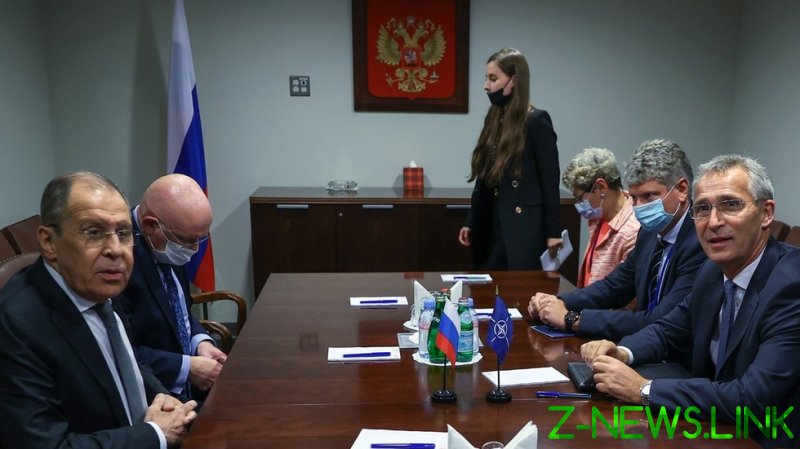 Speaking in front of Secretary-General Jens Stoltenberg, and in the direction of gathered journalists, the veteran diplomat quipped that Brussels might attempt to convince Moscow to become a member.

The long-serving foreign minister is in New York for the 76th UN General Assembly, where several heads of state and senior officials have gathered to address fellow leaders.

Aside from discussions in the main assembly, officials from around the world have planned bilateral meetings with their foreign colleagues. On Wednesday, Lavrov also met British Foreign Secretary Liz Truss and Irish Minister for Foreign Affairs and Defence Simon Coveney. He will hold around 25 meetings during the week-long assembly, which began on Wednesday.

Following the meeting with Stoltenberg, an official statement from the Russian Foreign Ministry said that Moscow brought attention to its “concrete proposals to de-escalate and reduce tensions.”

Earlier this year, Stoltenberg told German TV channel Welt that he proposed a face-to-face meeting between NATO and Russian officials.

“The ball is now in Russia’s court. I would like to invite Russia again to participate in a meeting of the NATO-Russia Council as soon as possible. We have a lot to discuss that is in the common interest of NATO and Russia,” Stoltenberg said.

According to him, the two parties need to exchange information on military maneuvers “in order to prevent misunderstanding and possible escalation,” among other topics.