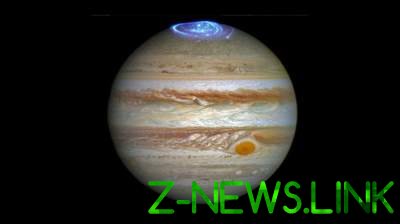 With the help of special equipment, the experts could consider on the planet Aurora.

Astronomers have recorded the Aurora at the South pole of Jupiter in x-rays. The article was published in the journal Nature Astronomy.

Observations have shown that the Northern and southern lights are not similar to each other – in particular, their brightness varies different, but the pulsations are not correlated.

Last year the team of “Juno” told about the first scientific results of the program. The researchers were able not only to study Jupiter’s magnetic field, but also to register the Aurora on it. Their main source is charged particles of the solar wind, which collide with gas molecules and transfer energy to them. Excited molecules re-emit it in the form of light quanta. Another source of the Aurora is considered to be the volcanic activity on the moon IO, as well as emissions of ionized particles other satellites.

See also:  Scientists have found another cemetery of sunken ships

Now astronomers were able to register southern auroras on Jupiter in x-rays. They conducted observations using x-ray space observatories XMM-Newton and Chandra X-Ray. It turned out that the South pole of the planet there are ripples in x-ray emission with a period of 9-11 minutes. At the same time, the study of the Aurora Borealis strictly periodic pulsations could be detected – their period was 12, 26 and 40 to 45 minutes, a pattern scientists have not identified.

In addition, the brightness of the Aurora was varied in different ways. Two sessions of observations showed that at the South pole it has increased 40% since the end of may until beginning of June 2017, while at the North pole, the brightness is contrary decreased by 40%.

“The behavior of the x-ray hot spots on Jupiter begs the question of what processes are responsible for the appearance of the Aurora. We know that the contribution of the interaction of ions of the solar wind with ions of oxygen and sulfur, the source of which is the moon of Jupiter. However, the role it plays in the emergence of x-ray radiation remains unknown,” – says one of the study’s authors.