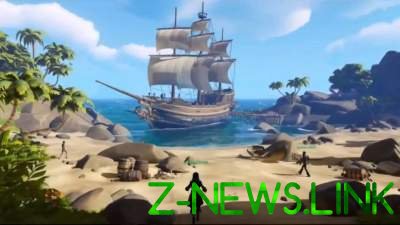 Full release Sea of Thieves on Xbox One, Xbox One, and PC X still scheduled for early 2018.

Studio Rare continues to make merry multiplayer Sea of Thieves, designed to pamper you in the most authentic pirate life, full of adventure, battles, treasure hunt, music and of course, grog.

In the new issue of videodnevnikov developers team decided by example to demonstrate some gameplay elements of the upcoming Sea of Thieves. As a result, in seven minutes you can see how they are operated with small ships, exploring the island, shot it the same (!) from guns and get drunk (among other things, with corresponding special effects), and then get stuck in a brawl with the bigger fish. Well, how it all ended, see for yourself. And in 4K resolution.

By the way, very soon, you’ll only watch for entertainment pirates of the Rare side. The Studio has announced that soon all who joined the Insider Programme before 1 December (and it is, say, about 200 thousand people) will receive an invitation to a new stage of technical alpha test.

Full release Sea of Thieves on Xbox One, Xbox One, and PC X still scheduled for early 2018.