Home / INCREDIBLE / NASA told as to look for aliens

NASA told as to look for aliens 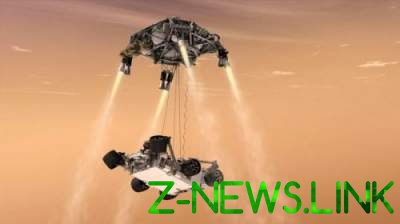 Scientists intend to improve their methods of studying the red planet’s surface and to reach a qualitatively new level of the search for life beyond Earth.

The project Mars 2020 has announced that it is actively engaged in the development of the next-generation Mars Rover, which by 2020 will be sent to the surface of the red planet. Its main task is to improve its own methods of investigation of the Martian expanse. The main difference between this installation in that it is equipped with a large number of wheels, and will be able to collect desired information more Autonomous. At the core of the Rover will be to drill and caching system is to operate in a mode not only of collecting samples and packing them in special capsules. Representatives of the jet propulsion Laboratory office (Pasadena, USA) are the initiators and the main participants of the project Mars 2020. “The main objective of the project is to to know whether there was or whether there was ever life outside of the Earth. Today it is one of the main mysteries for science and humanity as a whole. Those samples that we collect during this mission will help us to get closer to the answer to this fundamental question”, — quotes RIA Novosti Ken Farley, the head of the academic mission Mars 2020.

The so-called cruise phase of the project involved representatives of JPL Space Assembly Facility. The developers of the new Mars Rover reported that 85% of all technical “stuffing” Mars 2020 will be the best characteristics of its predecessors. Jim Watzin, program Director, NASA Mars said: “This saves us money, time and most of all, reduces the risk.”

Nacouzi added that at first glance, reading the materials about the creation of Mars 2020, it may seem that a previous project similar in many ways to the future creation of the Department. In fact, however, it has fundamental differences. The mission has set itself additional objectives: to explore those areas which may have been or even are living organisms. The latter can be in the crater of Jezera plateau Big Syrt or Gusev crater, researchers will focus on places where 3.5 billion years ago there were rivers and lakes. It is known that in February of this year, nacouzi collectively reduced potentially the study area with eight locations to three.

“To achieve these new goals the Rover has a Suite of advanced scientific instruments. He will look for biosignals in the microbial scale: x-ray spectrometer will focus on spots the size of a grain of salt, and ultraviolet laser detect “glow” of the excited rings of carbon atoms. Primary radar is the first tool that “will look” under the surface of Mars, showing layers of rock, water and ice to a depth of 30 feet (10 meters) depending on the material,” according to NASA on its online online.

The next-generation Mars Rover will be equipped with a color camera with zoom lens and laserem, with the help of which you can do the analysis of rocks, soil and other substances on the surface of the red planet.
George tahu, Mars 2020, the head of NASA, said: “Our next tools will be based on the success of the MSL, which has become a testing ground for new technologies. They collect scientific data in ways that were previously impossible.”
Ken Farley from JPL added that to date, NASA has samples in order to analyze the soil of Mars and learn if life exists beyond Earth. Scientists believe they are closer to answer the question of interest to humanity: “are we in the Universe?”.

The next-generation Mars Rover will have updated the lander with the navigation system, which is focused on the features of the landscape. The so-called trigger range is configured in such a way as to capture the entire area, which is at odds with modern data maps of the red planet. However, the installation will focus on landscape features and offline to choose the area where you want to release the parachute.

Researcher al Chen of JPL reported: “the orientation of the navigation system allows us to move to the level where it is possible to reduce the risk of failure. Trigger range allows us to approach areas of scientific interest, covering a mile over a period of time which was considered impossible”. The scientist believes that the lander has a huge role for Mars 2020, as the slightest error can lead to fatal consequences.

While the realization of the project Mars 2020 is under development, possible additions and corrections. The participants of the mission report that collectively intend to review the points that seem fundamental.

In 2012, NASA experts have developed the Curiosity Rover that was sent to the surface of the red planet. There is a setting explored Gale crater near the equator of Mars. However, nasovsem managed to collect data on the dry lakebed on the planet. Already scientists have predicted that by 2020 will release a new Rover.

See also: Scientists have identified the most ugly fish in the world

The heir of Curiosity has all the best and proven features of its predecessor. Mars 2020 will be engaged in search of water and life on the red planet’s surface.