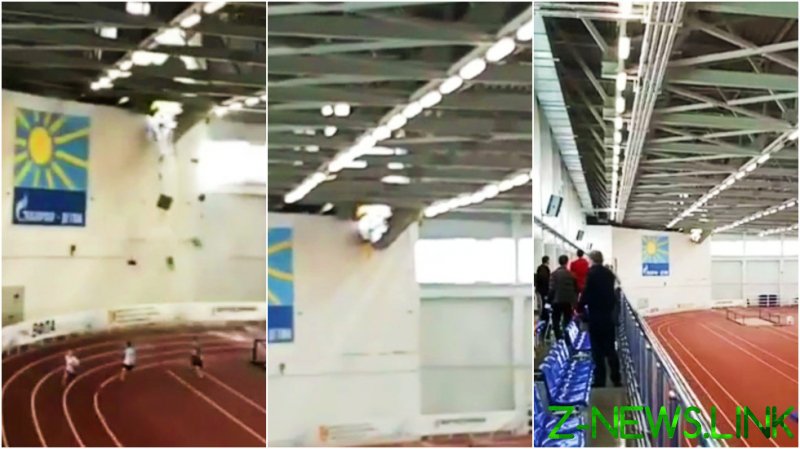 A troubling video of the roof collapse, which stunned onlookers at the Veresniki track and field indoor arena in Kirov, shows parts of the exterior falling over a corner of the track which had just been passed by a group of young runners.

According to local reports, the section of the arena collapsed under the weight of wet snow just as the competitors were running the final part of their race.

“Our eldest son went to the training area and my younger children and I went up to the spectator stands,” a local who asked to remain anonymous told kirov.kp.

“At that moment, boys of 10-11 years old were running a 400m race. They reached the final circle, ran [round the corner] and just a few seconds later a part of the ceiling fell.”

“The children immediately began to leave the building as they were, in training clothes,” they added, explaining that their family went straight to their car without getting changed before being called by a coach keen to check on their welfare.

All races were immediately suspended and safety checks are now being carried out. The regional prosecutor’s office has also reportedly taken an interest in the situation.

“The arena is new,” wrote a Kirov resident who posted the footage. “I’m very angry. Child athletes could have died.”

A representative purporting to speak on behalf local officials said: “One roof segment partially collapsed. The exact cause of this collapse will be established by the commission, which will begin work on April 5.

“All competitions and training events in the arena have been suspended. There are no victims either among adults or among children. On behalf of the Governor, Igor Vasiliev, the roofs of all sports facilities in the region will be inspected.

“In the near future, details of the situation will be discussed with the owner of the building, from which the regional government is renting the arena building.”

Part of a statement on the venue website said: “There are no casualties. The destruction of one roof segment in the first span occurred over the warehouse.

“All recommendations for roofing maintenance during heavy snowfalls were regularly followed by the administration of the sports complex in full.”