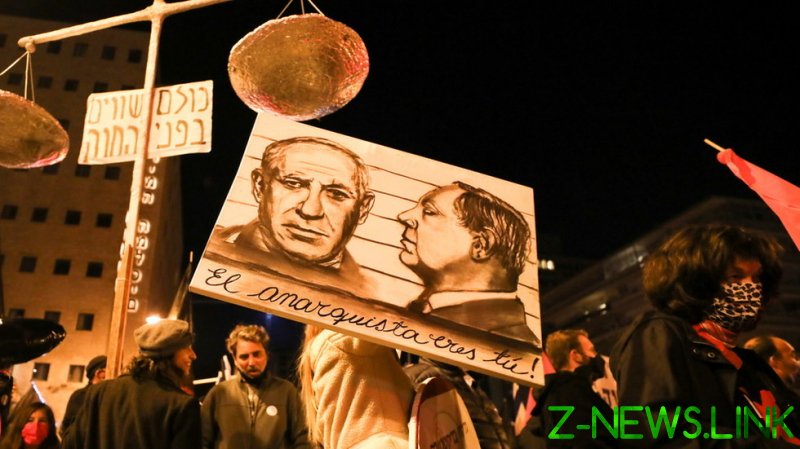 Current Affairs editor Nathan Robinson, a columnist for the Guardian, tripped over Tel Aviv’s time-honored third rail back in December. He was incensed – as any sane American might be – by the truly preposterous piles of money that were being bundled off to Israel as part of what was supposed to be an omnibus spending bill combined with Covid-19 stimulus passed by Congress as a life-raft for a desperately needy American populace. So he sent out a tweet.

Robinson’s tweet – which wryly suggested “it’s the law” that “the US Congress is not actually allowed to authorize any new spending unless a portion of it is directed toward buying weapons for Israel” – was a joke that took a moment to recognize as a joke, given its resemblance to reality, as the best satire often is. But, at some point, he seemed to get cold feet, following up the tweet with a qualifier noting while it wasn’t really the law, it was “at least so customary as to be functionally identical” to it.

Apparently smelling weakness (and finding satire a wholly inappropriate pastime for a Guardian columnist), the Guardian’s US editor ordered him to delete the tweets, declaring they were not “helpful to public discourse.” One might ask how 95 percent of what’s printed in the Guardian is helpful to public discourse, but one would probably not receive a reply. The email also included what seemed to be a forwarded message from some humorless individual who denounced the tweets as “clearly anti-Semitic,” arguing they were “saying that the only Jewish state controls the most powerful country in the world” and were liable to “inform murderous hatred.”

“Delete this and apologise,” the nameless critic demanded.

Robinson at this point was going to get fired no matter what. He could have stood his ground, explaining to his editor that only the unsigned letter-writer had claimed “the only Jewish state controls the most powerful country in the world,” a conclusion which was nowhere to be found in Robinson’s tweets. He could have pointed out that deeming criticism of Israel “anti-Semitic” was itself anti-Semitic, because plenty of Jews disapprove of the sociopathic actions of the Israeli government and don’t appreciate being used as human shields for those actions. Or he could have just said “no.”

Instead, he went the route traveled by so many journalists desperate to save their jobs, deleting the tweets, groveling at the feet of his editor, and even asking for guidance from the Guardian on what was off-limits – only to be told there was no such code, just an “unwritten one.” Thus was Robinson sucked into the apology vortex that has destroyed so many upwardly-mobile political and media figures – including UK Labour leader Jeremy Corbyn – who’ve dared to oppose the “war crimes” of a foreign country.

After weeks of emails going unreturned, Robinson was informed his services would no longer be needed.

His fate certainly had a ring of poetic justice – his last column published by the Guardian denied the existence of “cancel culture,” gloating that “bigots like Jordan Peterson” aren’t owed a platform after some employees at the publisher who’d already inked a deal with Peterson complained.

However, the Israeli lobby has been bullying journalists since long before “cancel culture” had a name, as Robinson himself documented in a typically long-winded piece posted to his website after he discovered his groveling had been for naught. Indeed, today’s “cancel culture” practitioners most likely learned their craft from observing the craven sneak-attacks practiced by the Lobby that dare not speak its name.

Like the Israeli lobby’s defenders, cancel culture practitioners pile on their targets without regard for logic, fact, or common sense. They hammer away at not only their victim, but their victim’s employer until it becomes easier to just give them what they want, even if the “offensive” statement that started the controversy was utterly unimpeachable.

Robinson’s criticism of the US dumping billions of taxpayer dollars at the feet of Israel while millions of Americans struggled to make ends meet was accurate, as most job-killing jabs at Israel are. Because there is no way of justifying the expenditure of $3.8 billion per year on a country that deliberately antagonizes its neighbors in order to justify the purchase of more American weaponry, Israel’s defenders merely lob the same “anti-Semitism accusation” grenade, again and again. As former Israeli minister Shulamit Aloni has freely admitted, “it’s a trick, we always use it.”

It doesn’t matter if the critic of Israel is himself or herself Jewish, either: The list of Jewish critics of the Israeli government’s heinous crimes, all dismissed as “self-hating Jews,” could fill a book (whose publication would no doubt be censored). The Israeli government does not represent the Jewish people, no matter how hard it pretends to, and to suggest it does is itself anti-Semitic.

Unfortunately, the American establishment is utterly unwilling to stand up to these bullies for fear of being smeared as anti-Semitic itself, leading to the spectacle satirized so well in a New York Times cartoon from two years ago – one which also got its creator fired.

It’s a trick they will keep using until someone in the media establishment grows a backbone. As more and more self-styled aggrieved groups pick up on how ‘cancel culture’ works, eventually journalists will be unable to speak at all.