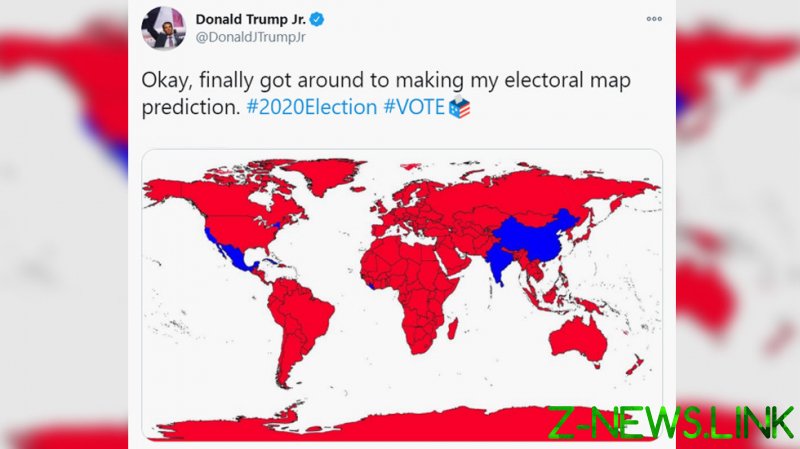 Unsurprisingly, the world map Don Jr. posted on Election Day had just a few wins marked in for Biden: the traditionally ‘blue’ states of New York and California; China, with which Trump has often accused Biden and his family of having corrupt ties; plus Mexico, India, and – most unexpectedly – the West African nation of Liberia. The South Pole, however, went to the Republicans.

A Trump victory in Antarctica came as quite a shock to many on Twitter, with one joking that it used to be “solid blue” but had obviously since flipped to Republicans.

“Despite most voters in this area being penguins, things are rarely this black and white,” quipped one commenter.

Liberia ‘voting’ for Biden also raised some eyebrows, as many failed to see any obvious connections between the country and the Democratic Party.

Some seemed to take the whole thing quite seriously, pointing to data suggesting that in reality, Canadians and Europeans — which are colored red on the map — would probably be more sympathetic toward Biden than Trump, if they had the chance to vote.

Others were baffled by Don Jr ‘giving’ India to Biden, as both the incumbent US president and Indian Prime Minister Narendra Modi often speak about having a great relationship. His map also seemed to suggest the independence of the contested Kashmir and Ladakh regions.

Even more inconsistencies emerged upon further social media inspection. The map left several countries like the United Arab Emirates, Armenia and Croatia blank, while also coloring in the Black, Caspian and Aral seas as Republican strongholds. “Every time I look there’s something new,” tweeted one person about the head scratcher of a map.

At the end of a thorough social media investigation, it was finally revealed that the president’s son ‘borrowed’ the jokey graphic from another conservative tweeter, who goes by the nickname ‘One Walleee’.