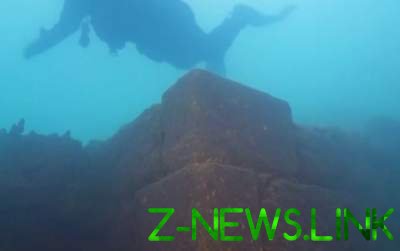 Scientists estimate that the building is over three thousand years.

After ten years of searching at the bottom of the second largest lake in the middle East, archaeologists have discovered the ruins of a large castle.

According to scientists of the University “100 years of van province”, the building is over three thousand years.

Lost underwater cities and castles are a popular motif in folklore all over the world. Usually it’s just a legend, but a Turkish scientist who worked alongside an independent team of divers was lucky to find the building of the legends on lake van.

“There were rumors that the water may be interesting findings, but most archaeologists and representatives of the museums have told us that finding anything is impossible,” – said the head of the team of divers Tahsin silane.

Presumably, the castle was built during the existence of the Kingdom of Urartu IX-VI centuries BC. Until the mid-nineteenth century the ruins were still settlements, but then people left these places, as the level of lake van rose. The peoples living near the lake, built their dwellings and religious structures, when the water level was much lower.

Scientists have only begun work on the castle and can’t yet specify its exact dimensions, nor what is inside its walls. It is only known that the height of the walls more than three meters, and the alkaline waters of the lake contributed to the preservation of the castle.

“It’s a miracle that we were able to find the castle under water. Archaeologists will come here to study the history of the castle and provide information about it. Until we found the exact location of the castle, took a picture of it and have made progress in our studies. We believe that we have opened a new area of study for archaeologists and historians”, – said the diver Tahsin silane.