Home / WORLD / What if neither Democrats nor Republicans want to win in 2020? No one wants the task of changing the full diaper of US Empire

What if neither Democrats nor Republicans want to win in 2020? No one wants the task of changing the full diaper of US Empire 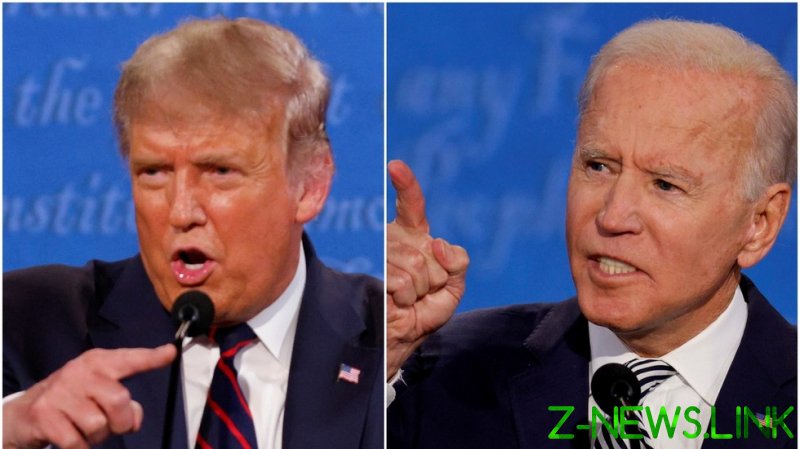 Whoever wins the 2020 election will be immediately confronted with a full plate of thorny political issues, from impossible national debt to unwinnable (and apparently unendable) foreign wars to artificially-amplified racial strife to metastasizing income inequality to a pandemic that seems determined to put the last nail in the coffin of the US Empire.

No matter his actions, the winner will be blamed for everything that happens on his watch – never mind that these catastrophes have been decades in the making, and a single man stopping them is no more possible than halting an avalanche. In this light, Biden’s doddering-old-man persona and Trump’s own bewildering missteps make perfect sense. What sane candidate would want to be left holding the bag of crumbling American hegemony?

“President 46” may see the long-threatened start of World War III. Thanks to decades of overspending on unwinnable foreign wars against a vague conceptual enemy (“terrorism”) that the mighty wurlitzer of the US propaganda establishment has tied to countries that pose no legitimate threat to the American people, the US is has all but bankrupted itself destroying the Middle East. Despite promising to end the devastating quagmire in 2016, Trump poured ever more resources into the region to exert “maximum pressure” on Iran, the one country left standing of the “seven countries in five years” General Wesley Clark infamously claimed the Bush administration’s bloodthirsty neocons had targeted for regime change.

The US spends more on its military than the next seven countries combined – or than 144 other countries put together, according to 2018 figures, but somehow can’t keep from arming its enemies too. Perhaps the Pentagon just feels sorry for them and wants to try to ensure a fair fight, but this ill-thought-out policy has equipped groups like Islamic State (IS, formerly ISIS/ISIL) to stage false-flag attacks that can then be blamed on governments like Syria or Iran and used to justify the expansion of the never-ending war.

After taking millions of dollars in donations from rabid pro-Israel ideologues like Sheldon Adelson and Paul Singer, Trump basically owes them their war on Iran, as they’ve made it clear that merely tearing up the JCPOA Iran nuclear deal wasn’t enough. But his reluctance to actually follow through beyond round after round of devastating sanctions suggests he doesn’t have the stomach for a full-on ground invasion. And Biden worked under Barack Obama, who actually defied the US’ Middle Eastern taskmaster to sign that nuclear deal in the first place. Neither really wants that war, but it seems inevitable.

Whoever wins in 2020 will face a reckoning with a technology sector that has become in many ways more powerful than the government itself. Twitter and Facebook have taken to poking the president in the eye by shadowbanning or even removing his posts, rubbing their power in Trump’s face, and Google and Amazon have so much dirt on the CIA, FBI, and DHS they could take down the whole system if some crusading president (or prosecutor) crosses them.

And what can Washington do? Government agencies have been using Big Tech as a workaround to skirt the First and Fourth Amendments for years. Constitutionally barred from censoring political speech themselves, they have merely leaned on Facebook, YouTube and Twitter to shut down ‘conspiracy theories’ and other wrongthink and used specially-built backdoors to poke around in users’ private lives without the hassle of warrants. Companies that allow these abuses are rewarded with protection of their monopoly status and billions in profits.

Despite an executive order and a lot of bluster threatening Big Tech’s Section 230 protections, Trump has not made any real efforts to halt the ongoing censorship by social media of his most vociferous supporters – perhaps realizing these firms are de facto military contractors whose participation in the information war propping up US empire is vital to that empire’s continued existence. And while Biden has been treated relatively well by Big Tech thus far, he needs the support of progressive Democrats in order to beat Trump, a group that has been subject to the same censorship as the pro-Trump conservative Right. The likelihood that he will stand up to Big Tech to win over this group is approximately zero.

So much hype has come out of both parties about a stolen election or “coup” that, whatever the result in November, violent street clashes are inevitable. If the winner tells the rioters to sit down and shut up, he’ll be seen as capitulating to the system he was supposed to bring to heel. If he cheers them on, he risks losing the support of law enforcement and the military – which could really hasten the collapse of the empire. Neither Trump nor Biden – both old men a decade past traditional retirement age – want that kind of trouble.

Record levels of income inequality, plus the economic fallout of suicidally-stupid government responses to the Covid-19 pandemic, have pushed the American public into a state of panicked desperation. More than ever, they’re wondering where their next meal will come from and how they’ll pay the rent. But thanks to decades of dumbing-down imposed in the guise of public schooling, most lack the vocabulary to articulate these problems or trace them to their proximate causes (namely, a rapacious ruling class that is frantically asset-stripping the nation in the hope of getting out with the cash before the whole thing blows sky-high). Neither party’s rhetoric is helping: Biden’s “team” blames white supremacy, while Trump’s blames crypto-communists.

Whoever gets elected has to follow through on the absurd fantasy they’ve spun to explain the nation’s problems to their followers while unwinding their opponent’s reasoning – not an enviable task. The Democrats have so amplified the “threat” of racism that a white person declaring him- or herself  “not a racist” is actually deemed racist in itself, and Republicans have bizarrely declared anyone to the left of Ronald Reagan to be “radical leftists” bent on turning the US into Venezuela at a time when most Americans could desperately use some socialist-style government programs to get them back on their feet.

As November 3 looms, both candidates have seemingly been campaigning for their opponent. Biden urged voters who thought they were better off under Trump to reelect him earlier this week), while Trump recently threatened to hold cash-strapped Americans’ Covid-19 aid hostage until after the election, only reversing course in the face of public outcry. Whoever is left holding the potentially-explosive hegemonic hot potato, their job as chief rearranger of deck chairs on the rapidly-sinking Titanic of empire is nothing to envy.