Home / WORLD / Wayne Dupree: So now rocks are racist? US university caves in and removes a giant boulder because woke students demand it

Wayne Dupree: So now rocks are racist? US university caves in and removes a giant boulder because woke students demand it 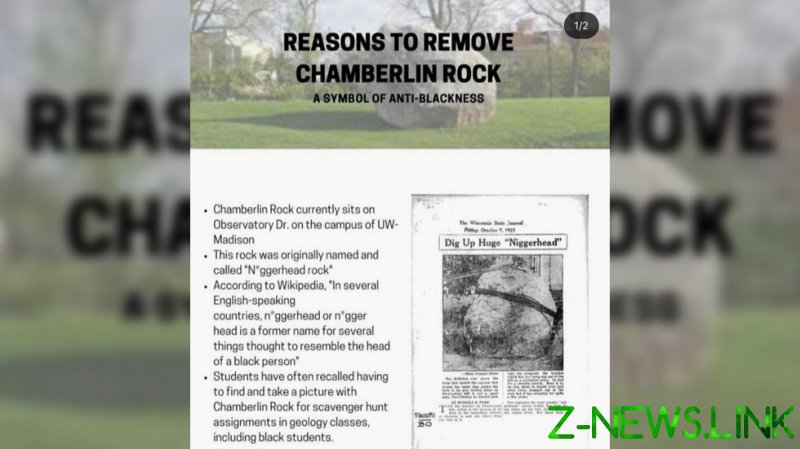 The university last week surrendered common sense when it agreed to remove a boulder which students deemed controversial. It seems the Black Student Union and other ‘woke’ activists disapproved of the way a local newspaper described it nearly 100 years ago, using the N-word.

When just a tiny minority of students (it has an undergraduate enrollment of some 31,650, and 9,300 graduate students) can make a university change a campus landscape that has been in place for nearly a century, something is very, very wrong.

These children, and yes, I call them children, don’t have the ability to think outside their bubble. They also don’t have the grace to recognize positive contributions to society at large by flawed individuals. Since we are all flawed, this ultimately means there can be nothing ‘good’. They will live a life of outrage and misery.

The offending boulder is called Chamberlin Rock, and was placed on the top of Observatory Hill on the campus in honor of Thomas Crowder Chamberlin, a geologist and former university president. A story about it in the Wisconsin State Journal in October 1925 was headlined ‘Dig Up Huge “Ni**erhead,’ a derogatory term that apparently was commonly used back then to describe any large dark rock.

University historians have searched for any other use of this term for Chamberlin Rock, but have not found any. However, one strike from a headline writer 96 years ago and you’re out, in today’s febrile world. Rock off, big boulder.

Juliana Bennett, a senior and a campus representative on the Madison City Council, said removing the rock signaled a small step toward a more inclusive school. I guess that’s easier than finding a more inclusive rock. Or at least one that identifies as being inclusive.

As if that wasn’t bad enough, the students have also demanded the removal of an Abraham Lincoln statue from campus.

We should have the right to know the full names of those wanting to erase our most sacred leaders, especially Lincoln, who galvanized half the country to fight a war to end slavery and then paid the ultimate price for it.

We should know who’s behind these attacks on our culture, history, and monuments. The petitions to remove them should be made public or be able to be requested through FOIA. Anyone attacked for defending their history should also have recourse and be free of retaliation and discrimination for doing so.

When I was going through high school, I asked my history teacher why I had to sit in ‘this stupid class.’ Their answer gave me my greatest lesson and it has stayed with me ever since. They told me: ‘History is exactly what it is, it’s history, and with American history, it’s a delicate part of the good, the bad, and the ugly times that cannot be erased; we teach it to learn from the mistakes of our past so we don’t repeat them today or in the future, and we can become better people and a better America.’

I thought of this as I read about Chamberlin Rock, and all the other relics of our nation’s history being destroyed and taken away from children to see and understand why and what the meaning is of these historical artefacts and figures. No matter how good, bad or ugly, they serve as lessons for our future; they represent the history that you do, or don’t, want to repeat.

To cover it up, to throw it away, to pretend it somehow didn’t happen, that it isn’t part of our shared heritage, is wrong.

Our dark history is being repeated and is being fueled by a narrative of money, greed, and power from lifelong-elected politicians that lived in the times of segregation and oppression and should know better. If you truly want change, you have to learn from history and stop tearing down statues and look at them and do your research. Education is the key to a united, equal, and diverse American future.

The operation to remove this 42-ton boulder – a rare, large example of a pre-Cambrian-era glacial erratic – cost around $50,000. Experts say the rock is likely over two billion years old. Imagine – you’ve spent all that time on Earth, and one tiny infringement sometime in your third-billionth era, gets you banished. It obviously forgot it was supposed to be Rock Against Racism.

I wonder how many families would have preferred to use the money spent on this ridiculous operation on a different cause, for example, a scholarship for low-income families. This country is losing its mind.

I’ve a better idea. Suppose we start demanding the removal and relocation of students who don’t like something they see on their university campus and call for its removal. Wouldn’t that make more sense and cost less money? Let them choose a different school. Simple!

Since rocks are now racist, the only reasonable action is to remove all rocks from the Earth. I’m just hoping that since the invention of the printing press, no one has written a headline associating water with a racist term as that could be a real problem.

Where does it all end? Should the family of the writer of that offensive piece back in 1925 be hunted down and be canceled for daring to be his relatives? Watch out, offspring of one Russell B. Pyre.

Why do we put up with and pander to all this nonsense? I think it’s time that leaders within the education and business community started telling people to grow up. Where are the leaders with some courage and integrity who would put a stop to surrendering to all the sniveling, whining, narcissistic millennial adults? Appeasing them as sure as heck won’t work: they will never be happy.