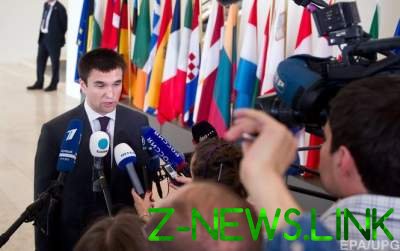 According to Klimkin, Ukraine starts information campaign on human rights violations in the Crimea.

The head of the Ministry of foreign Affairs Pavlo Klimkin has announced plans to create a comprehensive international platform for the de-occupation of Crimea.

Among other things it involves an information campaign designed to inform the world community about the situation of violation of human rights in the occupied Peninsula, the Russian Federation.

See also:  Learned the name of the winner of "Miss Ukraine-2017"

“Our goal is to create… a platform for de-occupation. Fixed format, which would include not only countries and key international organizations, but also to all who can help us”, – said the Minister.

He also noted that preparations for the voting on the Ukrainian draft resolution of the UN General Assembly on the situation of human rights in Russian-occupied Crimea and Sevastopol helps to consolidate friends and partners of Ukraine on the issue of de-occupation.

See also:  It became known why the head of the armed forces will fly in the US