Toyota has developed a device to produce hydrogen from the air 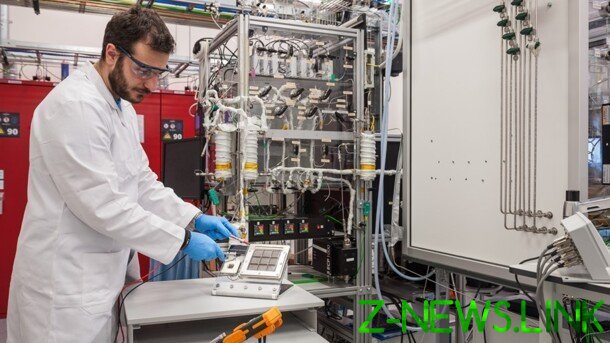 The European division of Toyota (TME) and the Dutch Institute for fundamental energy research (DIFFER) have developed a device to produce hydrogen. The gas is extracted from water vapor contained in the air.

A new technology developed by the specialists of the Department for advanced studies of materials TME and a group of scientists from DIFFER, was named the Launchpad for Innovative Future Technology (LIFT). Solid-state photoelectrochemical element absorbs water from the air and generates hydrogen under the influence of sunlight. The device consists of polymer electrolyte membranes, porous photoelectrodes and water-absorbing materials. The performance of the prototype is 70%.

Since the device decomposes water in the gaseous state, are excluded from the process stage pre-treatment that allows to use the method in areas where there is a shortage of drinking water. In addition, for the reaction does not need additional power source as in traditional electrolysis.

See also:  The Creator of Facebook announced an innovative device

“Working with gas instead of a liquid has several advantages. Fluid create some technical issues, such as the formation of unwanted bubbles. In addition, using water in the gas phase instead of liquid phase, we don’t need an expensive setup for water purification. And finally, because we use only the water that is present in ambient air, our technology is also applicable in remote areas where there is no water,” – said the head of the group of scientists DIFFER Michalis Campus.

In the future, the researchers plan to increase the size of the device, to improve the performance and extend the range of light used by the cell. While in the process involved only the ultraviolet spectrum, which is less than five percent of the total sunlight. Funds for further technology development Fund has provided ENW PPS the Dutch organization for scientific research NWO.

See also:  The Kremlin developed a strategy of Putin's nomination for presidential elections

Previously, engineers from Stanford University (USA) has created an artificial “lung”, is able to separate water from oxygen and hydrogen and turn them into environmentally friendly hydrogen fuel. The creators claim that the new fuel may result in the movement of everything from the car to the smartphone.