Home / policy / Theatrical method in the madness of Putin’s vote 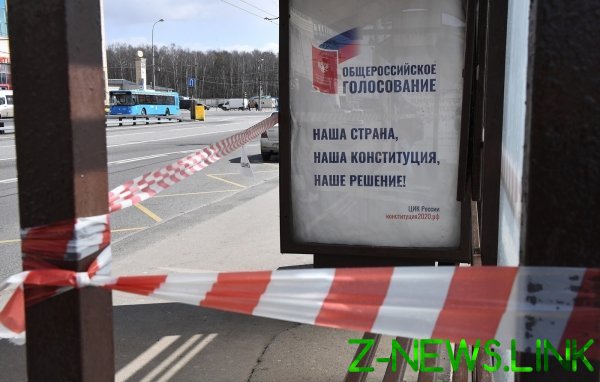 “The outcome of the 7-day national plebiscite in Russia aims to keep President Vladimir Putin in power until at least 2036, almost unique: after the final day of voting on Wednesday, Putin will get the necessary numbers. Less clear, however, why he even took that voters approved many constitutional amendments being approved by the national Parliament in Moscow, and regional legislative bodies across the country have joined the force a few months ago,” writes The New York Times.

“From a legal point of view, this entire event is madness,” says Greg Yudin, sociologist and political analyst, Moscow school of social and economic Sciences. But, he added, “it’s not a pointless procedure,” because the Russian system under Putin, depends on the appearance of popular support to legitimize decisions already taken. “It’s theatre, but very important and well-played theater. The system should organize demonstrations of public support, even when she’s not, ‘ said Yudin. – This vote is a test of drama techniques Putin.”

(…) Theoretically, the voters can reject the amendments and that Putin promised to respect their decision. But the chances of this happening are tiny (…)”, – the newspaper writes.

“The broad capabilities and resources of the state allowed him to mobilize people like Lyudmila Savinkin, chief editor of a small national TV channel “Yegoryevsk today” in the city to the South-East of Moscow. On the recording obtained by the independent organization to monitor the elections “the Voice”, she ordered its employees not only vote, but make sure they voted in city Yegoryevsk, no matter where they were registered. (Local officials risk losing their jobs if they fail to mobilize a sufficient number of voters in their districts). Those who do not obey, says the editor, its employees, the consequences (…)”, – reported in the article.

“For weeks on state television spoke of a long parade of famous Russians, who depend on the state in their positions, and income – from actors and musicians to the head of the Hermitage in St. Petersburg and Patriarch of the Russian Orthodox Church – they are persuading people to vote. Curiously, none of them mentioned the essence of the whole event: the amendment, which allows Putin to go beyond the constitutional limits in force since 1993, and to stay in power virtually for life, not to retire after his current term in 2024. Instead, they focus on other changes, such as securing the protection of pensions, family values, animals, the Russian language and the memory of Russians killed in the Second world war”, – says the publication.

“Voting “Yes” or “no” is a package deal, which means that anyone who finds the sacrifices incurred by Russia in the war – and these people a huge number in a country that lost over 20 million people during the great Patriotic war – is likely to tick “Yes” and , in doing so, support the idea to allow Putin, who is now 67 years, to remain in the Kremlin, at least until they reach 83 years of age,” writes The New York Times.

The publication notes that Alexei Navalny, the most prominent opposition leader in Russia, (…) “unleashed his most direct comments on the majority of middle-aged celebrities, who, being dependent on government funded concerts, joined a feverish campaign to achieve the active turnout to the vote. (…)”.

“On the contrary, many bloggers, “influencer” and other Internet celebrities have turned down offers to get paid for referring amendments, fearing that any hint of praise Putin will destroy their image among their young audience and will break the ad sales,” says the author Andrew Higgins.

“After 4 days of voting the state-controlled Russian polling organization VTSIOM published on Monday the exit poll according to which 76% of voters supported the amendments. The Central election Commission announced on Wednesday morning, at the beginning of the last day of the vote that have voted 55% of the 108 million registered in Russia voters. Only one turnout confirmed the success of the extravagant show of Putin”, – stated in the article.

“Almost complete confidence in the end result, according to Yudina, reflects the nature of the Russian “plebiscite democracy”, a system that revolves around one, the absolute leader, but still requires regular shouts of “public approval to give it legitimacy.” According to him, the main objective of the Kremlin today is not so much to obtain public approval of the amendments already approved, how much to give Putin a new boost of legitimacy at a time when the Russian economy was severely affected by pandemic coronavirus, and his approval rating fell to the lowest level since he came to power 20 years ago,” – says the publication.

(…) “Were scattered reports of obvious fraud, but more significant was the forced mobilization of a large number of voters whose livelihood somehow depends on to stay in good relations with the Kremlin,” the newspaper said, citing the example of employees of state-funded libraries in St. Petersburg, who complained that their organization had ordered them to vote and indicated what day.

“(…) In the last days of voting officials and the state media began an offensive against allegations of fraud, placed in social networks, some of which are clearly fakes. One of the shows ballot papers pre-marked in invisible ink that became visible later. The video was filmed during elections years ago in Kazakhstan, the newspaper reports. – More believable stories of fraud were received from opposition members of local election commissions, including in the Moscow district of Ramenki, which reported a suspicious increase in the voting without the documents from home. In the Lefortovo district of the capital, a man and his wife came to vote at the local polling station and found that they and their two children were already registered as voters”.

“For those who are not willing to play their role, a television editor from Egoryevsk has simple advice: “Sorry, we live in this country, who do not like, in other countries moved to live and all issues will be solved.”