The world after Putin 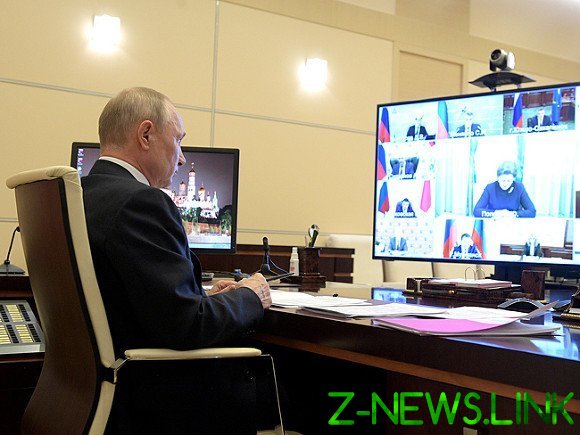 If you call a spade a spade, it revealed a huge hole in the social policy, which the last decades held power.

The argument that the world after the coronavirus will be different, has already become a popular phrase, however, the longer the epidemic lasts, the more we will make sure that it will be so. The world will change. Another thing, in what direction? Saying that life will be different, the commentators either did not specify what, or I assume that is certainly worse than before — more state control over citizens, less freedom, and so on.

However, it is possible to imagine a different development. For this we need to look at what is happening now. The last meeting of Vladimir Putin with governors and Ministers, broadcast live on 28 April, as usual, was primarily addressed to the Russian people. It once again was to demonstrate that the President always stands out, has its finger on the pulse, that he had everything under control.

You reached this message or purpose electorate remained indifferent to it — the topic of the next public opinion research. I want to talk about something else. Namely, what is behind these words.

Putin’s speech, as noted by many viewers with the experience, was like the report of another Soviet General Secretary Congress of the CPSU. He spoke about the steady increase in the production of medical masks (which is still almost impossible to buy in pharmacies), apparatus for artificial lung ventilation, the deployment of all new beds in hospitals, has proposed to establish a professional holiday of workers of the ambulance, has announced the extension of the quarantine for another two weeks and preparing for its collapse.

In addition, Putin said that the epidemic does not and other diseases: “it is Obvious that the main forces of medicine we aim for fighting the coronavirus. But, unfortunately, no one has the power to cancel other dangerous diseases: cardiovascular, cancer, and other acute and chronic diseases. We cannot abandon these patients. Just say: be patient and wait. Despite the current extraordinary situation, people should receive all necessary assistance. Read more…”

Furthermore, Putin compared the health care system with the mechanism: “If somewhere a failure occurs, if not enough manpower professionals is overloaded and cannot cope with the flow of patients, the result, people suffer… Again, everything has to be oiled all the parts to work as a single mechanism, the district internists and narrow specialists, reception and diagnostic departments, emergency services”.

In General, the “tasks, goals defined for the work comrades.” Here are the main Putin didn’t say where to find these companions. If specialists are physically not, where to get them?

If to call things by their names, it showed all the holes in our social policy. If for 20 years you step-by-step “optimize” it so that the country is continuously decreasing the number of doctors, nurses and paramedics, perform valuable guidance of the President no.

The principle of reasonable sufficiency in relation to the entire social sphere in modern Russia has long turned into a foolish failure. In the past, Putin loved to talk about human capital and its value to the country. However, in the Russian Federation of his era this capital is squandered in the same way as its natural resources. The extravagance of the government against its people and is expressed in the deliberate reduction of resources of health systems and education. The continually worsening situation in the past will affect the future degradation of science and culture, including cultural production, but more importantly, the mental degradation of the population. In fact, these processes are the last 20-30 years, just apparently they are not as noticeable.

With regard to health, the pandemic only revealed the catastrophic situation in it, which also had not two months ago, and has evolved the last decade. You can of course still buy or more to increase the output of certain equipment for hospitals, to buy more ambulances — the money is there. But the main problem — personnel — money today will not solve. Who will work with doctors, paramedics and nurses, if they do not? Not a good life for now to work with patients COVID-19 send even students of medical universities.

By the way, when Putin on Tuesday, as usual ably demonstrated its deep concern at the situation, he said nothing, for example, that doctors and nurses in the country should be much more than now. Was not on his side saying that, Yes, I admit, my mistake, next year will increase by half the funding of medical schools and colleges in order to dramatically increase the number of medical personnel per capita. He did not say this and not say. For one simple reason. Because in this case he had to radically revise the priorities not only with its financial policy, which seems to him perfectly balanced, but the basic principles of development of the country as a whole.

To this he just is not ready. The problem is that in order to change the priorities of its policy in the spirit mentioned above, Putin needs to stop being Putin, we know. That is, it must cease to be human, expressing the interests of the rich and powerful and give to the people only the crumbs from the master’s table.

The Governor can’t just go and change their policies 180 degrees. First, because he, as mentioned, can not become a different person. He is the one who is. And as a person and as a politician. It acts as it acts not only because it is the spokesman of interests of big capital, but also because it corresponds to his own views and beliefs.

Secondly, (and this is important!), even if such a fantastic change with it suddenly happened, the same narrow circle of people, representatives of those political and economic elites, whom he carefully nurtured and cultivated all 20 years of his reign, to put it mildly, did not understand.

Nor would this “second”. It is not necessary illusions. They prevent to think and act. Policy generation Putin, not only in our country but in most other countries, it is yesterday’s politics and change, they will not. But life imperiously demands a deep change. And if people want to live in a world that is not only more fair, but also efficient (a coronavirus as time has shown, that this world is not only not fair to them, but not effective), and the effectiveness of equal humanity, then we must again learn to think and act.