Home / economy / The West took hostage the money of Russian 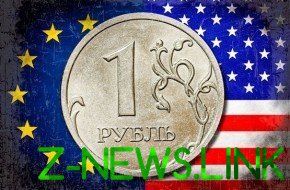 Russia’s international reserves are located abroad at a disadvantage. Officials tears, send their children to “worldly” West, “the lair of gays and pedophiles.” Both links in the same chain.

Invested in the Euro

On February 7, 2020 Russia’s international reserves are 562,2 billion dollars — about a third of Russia’s GDP, which is four times more than in the notorious national welfare Fund. 19% of them, nearly one fifth is monetary gold. 40% foreign government securities. 28.5% to deposits. 7% — private foreign securities. 3% paper international organizations. The rest of the stuff — reverse repurchase agreements, foreign currency debts and so on.

If we talk about currencies, the most Russian assets are denominated in Euro 30.6 per cent, slightly less in dollars. The yield of the Euro package for the year amounted to -0.2%. It is minus 344 million dollars — so much Russia paid for the year just for the right to have their money in euros. Other currencies give a plus, a maximum of 3.85% in Renminbi, which, however, failed us badly the year before: only for the second half of 2018, Russia lost on the investment in the RMB 1.5 billion dollars.

But maybe it’s necessary? Especially since, again, our investments give a small plus, in the aggregate 1.5% per annum. So investing the Central Bank.

Russian money abroad to dispose of conjoined twins — the Ministry of Finance and the Central Bank, and it is not always possible to tell who is responsible for what. It is well known, for example, that in difficult moments the Central Bank is very active on the foreign exchange market: buying rubles to maintain the exchange rate of the national currency or selling rubles for foreign currency to replenish the reserves. But in the statistics of the Central Bank of these data you will not find — transactions are made on behalf of the Ministry of Finance, it and questions.

So, while the Central Bank gets our money one and a half percent, the Finance Ministry, in turn, takes money. In the summer of 2019, he issued the securities under of 3.95% and 4.3% per annum. Again. Our state — and the Central Bank, though not quite a part of it, manages public money — investing, for example, dollars for of 1.84% per annum. At this time the Ministry of Finance borrows those same dollars to do nothing different, under 4.3% per annum. In March 2018 was little bonding and under 5,1%.

Anyway, it is a conclusion of public funds. Foolishly or prior intent?

About how it takes out money from the country’s Central Bank, we wrote recently. The gold we hold in our own country (well, Germany and Venezuela can tell us about how difficult it is to own property from other people’s bins), but the money — alas. For example, last year Russia very vigorously invested in French assets: on 1 April we held that there is 11.6% of its reserves, and on 1 July — already 15.4 per cent (more recent data are not available — to eliminate the influence on the market, the Central Bank promptly publishes only the total volume of reserves, the rest — with a six-month delay).

The difference is large — more than 20 billion Russian in its essence of dollars (or more accurately, different currencies, are translated into us dollars). Due to this, the French bypassed the Chinese and the Germans, taking first place on the pedestal of honor storage of Russian money. And who keeps the money, the one they enjoyed during the whole time of storage.

After the “big three” like our partners, followed by Japan, the US and the UK. Moreover, the United States two years ago was the leader, but then Russia exemplary withdrawn funds from the American debentures “treasuries”… and brought them to Germany, France and dearly beloved Kingdom.

The money remains ours, of course. From time to time. If relations worsen — and most of these countries have imposed sanctions on us and hinder the development of our country, we’ll stay with wonderful ious — units and zeros in the computers of the Central Bank and Ministry of Finance.

In fact, our foreign exchange reserves are held hostage to our relations with the West. And not only them.

Generally, the hostage is an extremely valuable asset, often overlooked by economists. But the more close to the people, the citizens, for example, terrorists, or simple thieves, well aware of whatever it is you have followers, weapons, equipment, you’re still doomed in clash with the authorities, if you do not know to take hostages.

In the “popular vote” on the popular website Anekdot.ru February 20, second place is a short anecdote:

“The best missile defense system in Europe and the US are children and the property of the Russian oligarchs and embezzlers”.

So the ancient and medieval rulers practiced an elegant way of preventive problem-solving: hostage demanded to his court the sons of partners or vassals. The young people lived in luxurious conditions, received an excellent education, but each of them knew that if their father behaves as-that not on concepts, very soon will start to receive the courier with a variety of his offspring. First symbolically — toes and nose — then something more serious.

This tradition in a slightly modified form has survived to our time. Most recently (by historical standards) in the USSR sent their children to study African and Asian socialist princelings. And now Russian elite massively sends children to European and American education. Even formally back, these kids (often very Patriotic parents) live at best for two houses and, of course, have property abroad.

When the West starts bombing Russia, these people will not click back. They have brought back other people’s money and their children. The most protected in the world from the Russian bombing a city is not Moscow, and London.