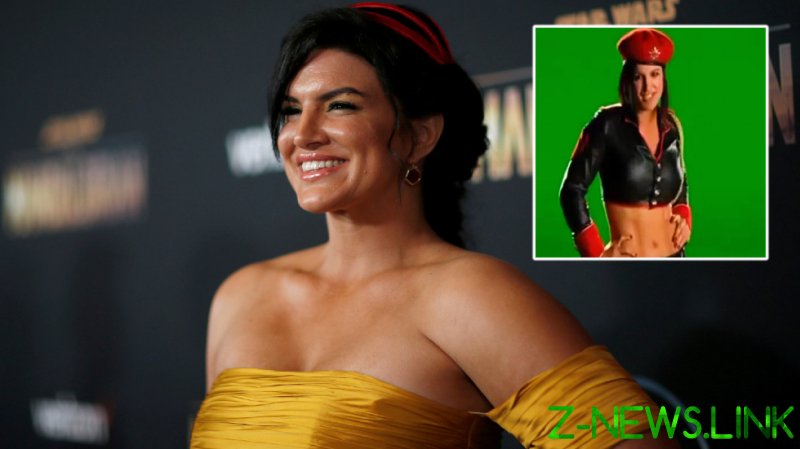 Scrapper-turned-thespian Carano fell foul of the cancel mob in February, saying she had been targeted by bullies before being fired from the Disney+ TV series ‘The Mandalorian’ in a response to her social media posts likening the demonizing of people for their political views to the divisive tactics of Nazi Germany’s government.

That has not stopped Carano from offering her forthright views on her accounts, although she made a lighter post as she recalled her role in the 2008 game Command & Conquer: Red Alert 3, showing herself on set and in costume as character Natasha Volkova.

Carano’s Instagram story, meanwhile, turned to politics and the pandemic, claiming that the enforcement of mask-wearing in some US states has not prevented hospitalizations from Covid-19.

The 38-year-old pin-up also shared a post claiming that people would have been “shut down” for sharing purported data about viral surface contamination, highlighted a negative story about Biden’s border policies, called the public health crisis a “never-ending story” and reproduced a meme visiting rape, slavery, theft and the “tyranny” of compulsory vaccinations.

Taking aim at Biden again, Carano shared an image likening the Democrat’s appointment as president to a horse being stuck between the rungs of a gate, a car becoming trapped in the branches of a tree and another vehicle being wedged above the gate and entrance doors to a property.

She then focused on the riots at the US Capitol that were a shocking feature of former president Donald Trump’s final days in power, pointing to a report that said “media hyperbole” had been culpable for “fabricating crimes that didn’t exist”.

“The MSM [mainstream media] will never correct this,” the post concluded, without showing the full article.

Following her whirlwind tour of some of the issues close to her heart, which had been prefaced by a look at several artworks that have been created in her honor, Carano finished with a photo of a sign reading “turn off the news and love your neighbor”.

“Sunday love to you all,” the Texas-born combat trailblazer added to her following of almost two million.