Home / WORLD / The Guardian plumbs new depths: Inside the latest wild claims from its resident ‘Russiagate’ fanatics that Putin got Trump elected

The Guardian plumbs new depths: Inside the latest wild claims from its resident ‘Russiagate’ fanatics that Putin got Trump elected 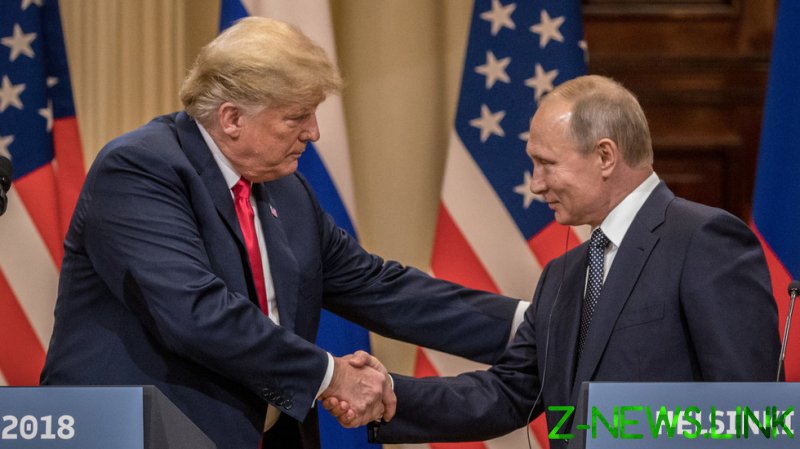 From 2016 to 2020, a single story with two elements dominated the American headlines: Russiagate. The first part of the narrative was the claim that the Russian government had used a range of tools, including disinformation, to ensure Trump clinched his country’s highest office. The second was that Trump had knowingly colluded with Moscow to achieve this goal.

After endless repetition, these claims became something close to sacred ‘truths’ for some people. And yet, as we now know, the whole thing began with a falsehood, or more accurately a single document containing a whole series of falsehoods.

This was the infamous ‘Steele dossier’, assembled by former British intelligence office Christopher Steele, as part of a strategy by the Democratic Party to dig up dirt to blacken Trump’s reputation.

The dossier contained a number of inflammatory stories about Trump’s relationship with Russia. It also claimed its information came from sources close to the upper echelons of the Kremlin. This was untrue. As we now know, the information was hearsay, collected second- or third-hand by someone who didn’t even live in Russia. In short, it was a near total fabrication.

Unfortunately, Russiagate induced many journalists to abandon any effort at critical thinking and to treat all anti-Russian allegations with a distinct credulity. Particularly prominent among them was Luke Harding of The Guardian, who even published a book entitled ‘Collusion’, laying out the case against the Russians and Trump. Its logic was often rather bizarre. For instance, Harding’s “evidence” that an associate of an associate of Trump was a Russian spy was that he used emojis in an email.

I kid you not. You use emojis, you’re a Russian spy. It gives one a sense of the quality of Harding’s argument.

Indeed, Harding has what the British call ‘form.’ In another instance, he claimed Trump’s one-time campaign manager, Paul Manafort, along with unnamed “Russians”, had met WikiLeaks founder Julian Assange in the Ecuadorian embassy in London. Unfortunately, the story turned out to be untrue. It was never retracted.

In short, there are reasons why some might want to treat what Harding says with a generous pinch of salt.

All of which is necessary background for his latest article in The Guardian, which details confidential documents he claims to have seen, allegedly showing “that Vladimir Putin personally authorized a secret spy operation to support a ‘mentally unstable’ Donald Trump in the 2016 US presidential election.” The piece is co-authored by two other reliably anti-Russian Guardian hacks, Dan Sabbagh and Julian Borger.

The documents in question are supposedly records of a meeting of Russia’s National Security Council, which is said to have concluded that Trump’s election was desirable, as it would “lead to the destabilization of the US’s sociopolitical system.” To this end, the meeting purportedly resolved to “use all possible force to facilitate his election,” including introducing “‘media viruses’ into American public life, which would … alter mass consciousness.”

Unfortunately, Harding fails to provide full copies of the documents in question, limiting himself to a single extract. Nor does he say where he got the papers. The only corroborating evidence is that “The Guardian has shown the documents to independent experts who say that they appear to be genuine.” Of course, many “independent experts” also believed in the Steele dossier, the Hitler diaries, the Zinoviev letter, and many other dubious or entirely fabricated documents. An appeal to anonymous “experts” isn’t particularly useful.

Indeed, there are some reasons to treat the story with a degree of scepticism.

First, the documents are like the perfect, solid-gold-plated proof that Russiagate storytellers have been seeking for years. The story is a little bit too good to be true.

Second, if these papers are indeed real, either somebody in the Kremlin has decided to leak the most top secret of top-secret documents, or British intelligence has a spy there and has then fed the information to Harding, risking exposing him or herself.

Both options are out of keeping with the past. Leaks from Putin’s team are very rare, to the point of being almost non-existent, and, as far as we know, neither the British, nor indeed any Western intelligence agency, has ever had a spy in the heart of the Kremlin. One can’t rule it out, but one has to have one’s doubts.

Third, the alleged motivation for backing Trump outlined in the documents smacks of what people in the West now retroactively think happened, rather than what would have likely been in the mind of Russian officials at the time.

In 2016, the primary reason why the Kremlin might have wanted Trump elected was a perception that he was not as hostile to Russia as his rival Hillary Clinton. Indeed, he had stated in speeches that he favored better relations with Moscow. But this isn’t mentioned in Harding’s documents. Instead, the focus is on “destabilizing” the United States by stirring up trouble through the election of a mentally unstable president.

These are not ideas that anybody in authority in the Kremlin has ever publicly expressed. Instead, they are ideas that gradually became dogma among conspiracy theorists between 2016 and 2020. In other words, the documents read like what Western Russiagate theorists imagine is what the Russians think, rather than what they really do think.

And fourth, it turns out that the short excerpt published with Harding’s article has a number of linguistic and grammatical errors, giving rise to speculation that it was written by a non-native speaker of Russian and then translated. Of course, this is far from firm proof of forgery – it could be that Kremlin notetakers just don’t write very well. But it’s food for thought.

This doesn’t mean the documents are fakes. D6 doesn’t mean false. But, at the same time, it’s not exactly A1 either – you need to treat the information in question with extreme caution.

Maybe the Russian National Security Council did indeed plot to put Trump in the White House. Or maybe not. We’re not in a position to tell. Either way, but you shouldn’t take The Guardian’s word for it.