Home / Incident / The “elite” of road accident in Kiev: the Ambassador of Egypt in the Mercedes crashed into a KIA

The “elite” of road accident in Kiev: the Ambassador of Egypt in the Mercedes crashed into a KIA 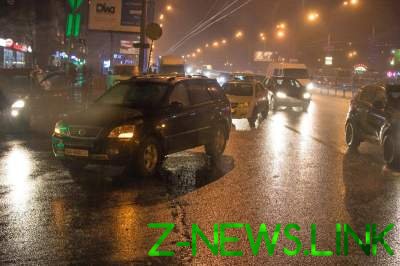 The accident occurred about eight o’clock in the evening, 30 November.

In Kiev on Victory Avenue, the accident occurred with the participation of extraordinary and Plenipotentiary Ambassador of Egypt in Ukraine Gassama, Eldin M. Ali. Mercedes diplomat collided with a KIA Sorento, at the wheel which was the girl.

After the collision, the Ambassador began to behave aggressively and even demanded from the driver of the KIA Sorento 650.e. compensation for a broken headlight.

According to preliminary data, the car of the diplomat was in the rightmost row. At this time, the girl from the second road turning to the right number. At the time of turn the car of the Ambassador, which led to the collision. As a result, the KIA Sorento damaged front and rear doors, and car Ambassador — broken left headlight. Fortunately, has done without victims.

At the scene of the collision had caused the patrol police. Who is to blame in this dispute will soon have to find out law enforcement agencies.