Home / Society / The Balkans can explode a volcano of war

The Balkans can explode a volcano of war 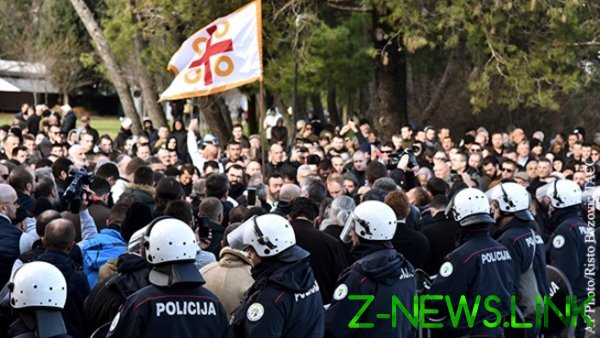 As you know, on the Balkan Peninsula has no active volcanoes. However, it is not so. In Macedonia, near the ancient city of Ohrid, is the active fumarolic field of romantic Slavic name Dovala – the only outward sign of volcanic activity in the Balkans. We visited him on the last day of the year. A sign saying “volcano” pointing in the direction of the gardens, and everywhere there was a strong sulfur smell – as though we were transported somewhere in Kamchatka.

“Natural radost” – as they call Duwala in the Macedonian – surrounded by abandoned houses. Moreover, the villagers ran away not only because of the terrible stench. They are afraid that someday there will be a real eruption, mindful of the high seismic activity of this region, where the earthquakes have affected literally all the major cities Sarajevo, Skopje, Zagreb, Dubrovnik, Banja Luka, Ljubljana, Split, Budva, Kotor, Belgrade. Accustomed to disaster, people logically expect them in the future – that has long been characteristic of local public consciousness.

Visiting in one trip all the former republics of the Socialist Federal Republic of Yugoslavia and visiting historically associated Albania, we made sure that the Balkans do resemble the now dormant volcano – but not in geological, but in the socio-political sense of the word. After gaining independence in the nineties, they largely continue to live according to the logic of destructive processes that have destroyed the once unified state, established following the Second world war under the auspices of the Communist party and tried to pursue an independent policy, balancing the interests of the West and Moscow.

Today it is somewhat small, and deeply weakened the peripheral countries involved into the orbit of interests of the European Union and the United States. This is true even in Slovenia, which first came out in 1991 from the SFRY, and has always been considered the most prosperous of the Yugoslav entity of the family of Nations. She now maintains a relatively high standard of living against their neighbors – but the Slovenian economy suffers from creeping deindustrialization in the background of massive expansion of German, Italian and Austrian manufacturers, who flooded the Balkan market. The economic crisis of the late zero and the ensuing anti-social reforms led to massive protests in the 2012 election. But no changes happened, and today Slovenia is gradually have shifted to a country that is trying to focus on the business – which, of course, does not promise the homeland of the anti-capitalist philosopher Zizek has some bright prospects.

Through tourism trying to live and Croatia, which has at its disposal the famous resorts of the Adriatic coast, with beautiful nature and unique monuments of antiquity. However, this does not save the country from crisis. High-tech enterprise, built in the era of the SFRY (the plants “Litostroy”, “Nikola Tesla”, “rade Koncar” and the famous shipyard), have collapsed or are in steep decline that keeps the country in a state of chronic systemic recession. EU membership finally finished off somehow surviving the nineties economy – although this status nice flatters vanity of local nationalists, who are still proud of the ethnic cleansing of the Serbian population. A resident of split happily talked about the fact that she doesn’t have to feed “the Serbs, Kosovo Albanians and Macedonians”. But then he complained that the local youth went to work in other EU countries, and her husband-the engineer told us in Russian that he had to work at JSC “AVTOVAZ” in Togliatti.

The high cost is forcing the Croats to go shopping in Bosnia and Herzegovina, which is an ugly fruit of the Dayton accords – a Confederation of the two entities under international control, which only keeps them within the boundaries of the formally single state. Banja Luka is the main city of the Republika Srpska is quite independent of the Sarajevo government capital, and the Croatian-Muslim Federation of Bosnia and Herzegovina, torn by internal contradictions, as the nationalist Croats want to highlight in her own country.

The national currency of Bosnia and Herzegovina is the convertible mark, which is equal to one hundred feninga – reflects economic and political dependency of the protectorate of the European Union. It was originally tied to the rate of the late German mark, and then, with necessary adjustments, to the rate of its successor, the Euro. On the coins of denomination of two and five km (two of these letters are always accepted foreigners for pointing kilometers) depicts the dove of peace with an olive branch in its beak. But true peace is still far – the inhabitants of the country remember the bloody events of the nineties, and two entities are fundamentally different used banknotes. Although they are printed in the same factories in Paris and Vienna under the control of the political and ideological overlords of Bosnia and Herzegovina.

In Montenegro, about which I have already described in a special article for the newspaper OPINION, the protests took place, vividly reminding about the realities postmedieval Ukraine. Former Yugoslav Communist Milo Djukanovic ruled this small country since 1991, with the open patronage of the West, who easily forgives him accusations of collaboration with the mafia and rampant corruption. This Balkan Poroshenko is now creating an artificial Montenegrin Orthodox Church to say “ostateczne prosavi!” Serbia. And he irritates the local population suffering from unemployment and high prices for commodities. The Montenegrin economy is another attempt to survive through tourism and foreign credits, which shamelessly exchange the remnants of national sovereignty. In this case, the agitating residents for membership in NATO, the government afraid of their threat from Albanian separatists.

The Albanian factor is a key problem of Northern Macedonia, which was recently renamed at the request of the Greek government. This kind of state experienced in the 2001 civil war between the Macedonian and Albanian communities. The arbitrator in this conflict are the US control of the region from a military base Bondsteel, located on the territory seized from Serbia of Kosovo. The Macedonian authorities obediently followed in the Wake of Washington’s policy. Otherwise they are threatened with separation abanasinia regions, which already enjoy full self-government – and the poor unemployed youth are recruited into the ranks of the criminal-nationalist groups, which proclaim as their goal the struggle for Great Albania.

Macedonian capital Skopje is a good example of to what extremes can reach in their actions of Eastern European nationalism, if not keep it in the inventory. In the centre of the Macedonian capital was built more than forty monuments, which represent the apotheosis of political and architectural kitsch. First of all it is a giant monument to Alexander the Great and his father Philip II, who presented the founders of the great Macedonian state – thereby causing the indignation of the Greek government. In addition, immortalized in stone all more or less known or absolutely unknown person who is somehow involved in the Macedonian history – from the Emperor Justinian and the Bulgarian Tsar Samuel to a host of local nationalist movements. They had spent about $ 500 million – a huge sum for a small and poor country.

In stagnation is Serbia – the former metropolis of the collapsed Yugoslav state, which is stuck in a political split between Moscow and Brussels. Its capital Belgrade has retained some originality by isolating and war – in contrast to most other Eastern European capitals that are developing in the image and likeness of one of the neoliberal model. Europe has not yet digested this ancient city on the banks of the Danube and the Sava – although three times bombed and shelled it during the last century. However, the problems of Serbia fully replicate the problems of the other Balkan republics. Deindustrialization and a lack of jobs lead to a mass migration of the working population.

Over the years, it only increases – despite the fact that the local authorities attempt to protect the domestic market from the influx of foreign goods. But it is impossible to do – because the process of disintegration of socialist Yugoslavia, was launched precisely in order to open its market for European goods and American troops who are surrounded on all sides by Serbia today. And the ruins demolished in 1999 of objects that still stand in the centre of Belgrade, reminiscent of the price of defiance of the imperialist dictates.

The fate of former Yugoslav republics is similar to the scenario fun movie with a sad ending, a normal for well-known films of Emir Kusturica. Thirty years of independence turned them into colonies of first world countries, and permanent economic crisis provokes the growth of social contradictions, coupled with the old ethnic strife. They accumulate, grow and may one day explode the volcano another Balkan war.