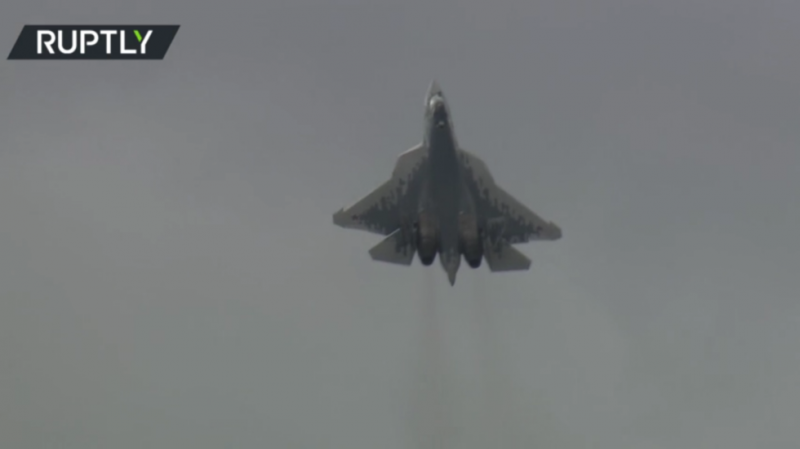 Pilot Sergey Bogdan showed off his incredible flight skills during the MAKS 2021 Air Show in Zhukovsky, near Moscow. He performed the ‘Bell’ stunt, one of the most spectacular and dangerous aerobatic maneuvers.

The jet began by doing a 90-degree vertical climb, then used its thrust vectoring technology to stay in one place as long as it could.

The stunt ended with the aircraft dropping its nose down and imitating the movement of the tongue of a bell.

The Su-57 is a fifth-generation multirole fighter that can destroy aerial, naval and ground targets, and can be fitted with a hypersonic Kinzhal missile. The plane’s mass production began in 2019.

Russia unveiled its newest jet fighter at MAKS, dubbed ‘Checkmate’, which was described as a smaller and lighter version of the Su-57.

At this year’s MAKS, Russia unveiled its newest lightweight stealth fighter, dubbed ‘Checkmate’. Described as the Su-57’s “younger brother,” the single-engine jet is intended to be capable of short takeoff and is fitted with modular weapon bays that can be equipped with the full array of current anti-aircraft missiles, gun pods, bombs and guided missiles. A drone version is also currently under development.

Checkmate is supposed to be a more affordable alternative to the US’ F-35, Saab’s Gripen and France’s Dassault Rafale.