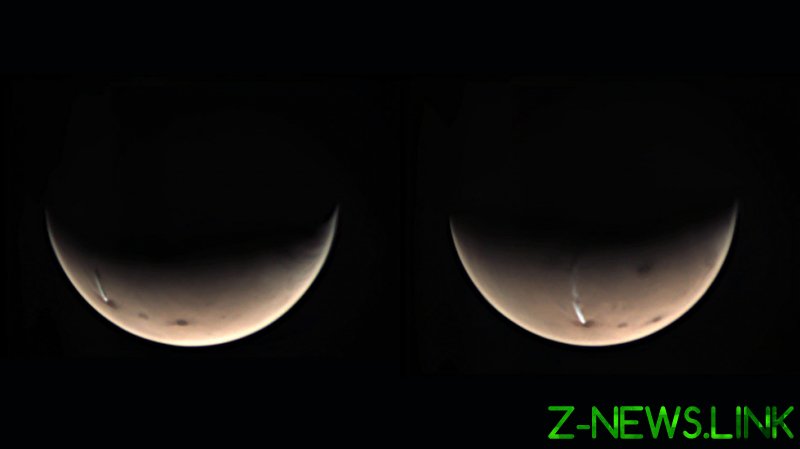 In 2018, the Mars Express captured a long, distended cloud blowing across the surface of Mars, extending some 1,500 kilometers (930 miles) from a long-extinct volcano.

Located in the southern Martian hemisphere, the Arsia Mons Elongated Cloud appears and reappears every spring or summer on the Red Planet. It has been captured by a variety of Mars probes in 2009, 2012, 2015, 2018, and again in 2020.

A recent study posits an explanation for the cloud’s origin and its repeat disappearing act, and hints that it may be more common than previously thought.

Researchers studying the Martian phenomenon compared and contrasted high-resolution observations of the 2018 plume, poring over observations dating back as far as the 1970s.

Their analysis led them to one conclusion: dense air ascends the slope at dawn and the ambient temperatures drop as the air gains altitude. At approximately 45km above the surface, the wind expands and its moisture condenses, clinging to dust particles in the air and creating what is known (on Earth, anyway) as an orographic cloud.

The cloud extends outward for a period of roughly 2.5 hours, as winds of up to 600 kilometers per hour (380 mph) rip it away from the volcano.

The plume has been observed extending up to 1,800 kilometers in length (more than 1,100 miles) and 150 kilometers in width (nearly 100 miles), before evaporating once morning gives way to afternoon and the sun scorches it away.

Explaining the sporadic observations, the researchers point out that timing is everything: the patchy records are the result of the varying paths and schedules of the numerous orbiters humanity has positioned at the Red Planet over the years.

Broadening humanity’s understanding of this one cloud will improve climate models of both Earth and the Red Planet, which could be crucial to saving one world before we can colonize another.