Home / policy / Relations with Russia for America mean nothing at all

Relations with Russia for America mean nothing at all 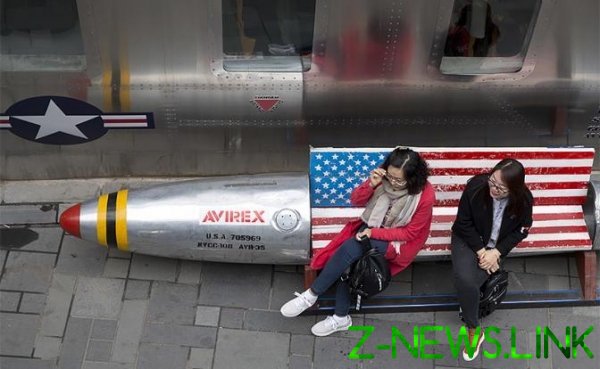 The three main victims of us sanctions — Russia, China and Iran unite in a military-political and economic Union, together to resist American hegemony. The prospects for the stability of the new world order in such circumstances, when Washington fell out with all (including allies of yesterday) is extremely fragile.

During a recent straight line Vladimir Putin has compared the introduction by the Americans of import duties against Chinese goods in the beginning of 2018 with the sanctions against Russia: their common goal, according to the President, — artificial constraining socio-economic growth of both countries.

Meanwhile, the us sanctions lead to the opposite effect: the state, which Washington classifies as the “axis of Evil” (and among them Russia and Iran) solidaritywith with each other to counter external economic constraints. In particular, Moscow’s official Beijing offer on the purchase of “modern weapons and military equipment of the Russian production, including additional batches of su-35” (at least, reported Federal service for military-technical cooperation). Chinese military expert Fu Cansao no doubt that this deal will have far-reaching consequences: it is, firstly, will lead to modernization of aging fleet of Chinese air force, and secondly, will allow to attract additional personnel. Overall this deal will demonstrate the strengthening of military-political contacts between China and Russia.

The transaction on purchase of 24 fighters was announced by Beijing in 2015, and on its completion, Moscow announced last April — after that the us Department of state announced introduction of sanctions against the Central military Council of China (another reason for the sanctions — the acquisition of the Beijing missile systems s-400).

Now it is not accepted to remember that the simultaneous sanctions against Moscow and Beijing became the first case applying Federal law of the United States “On combating the enemies of America through sanctions”, which Donald trump signed in August 2017.

Vladimir Putin and Chinese leader XI Jinping promised to conduct more foreign trade operations in their national currencies, to minimize dependence on the U.S. dollar, as well as to intensify joint infrastructure projects in the framework of “One belt and one road”.

The Americans are pushing for closer ties with Russia and China and Iran, which Donald trump is threatening to impose new sanctions. In fact, this is already happening: in may Beijing, bypassing existing us sanctions, has bought crude oil from Tehran, which, in turn, imports of Russian agricultural products in exchange for crude oil (this was stated by Russian energy Minister Alexander Novak).

See also:  Poroshenko said the conflict parasiuk with the police

American sanctions are intended to harm the General public, especially vulnerable people. They hurt the poor more than the rich, the sick more than healthy babies and children more than adults, — said the permanent representative of Iran to the UN Majid Takht Ravanchi.

Apparently, this statement is today, I can safely subscribe to the inhabitants of other countries that have fallen under the yoke of us sanctions in the first place, Russia. But the danger of the Association of victims of sanctions opponents in a unified anti-American front not afraid of Washington. Moreover, the list is updated, in particular to India, which in the past year, the United States introduced protective tariffs on imports of aluminum and steel from India.

Political analyst Sudha Ramachandran no doubt that US pressure on India, which is not such a major player on the global stage, has nothing to do with economic background: Washington is putting pressure on new Delhi to abandon technology 5G Chinese Telecom giant Huawei.

Real politics is not based on xenophobia

“Free press” discussed the situation in global politics with the sinologist Sergei Mstislavsky, a visiting lecturer of the Russian University of friendship of peoples (RUDN) and Russian state humanitarian University (RGGU).

“SP”: — Sergey, many Chinese experts believe that the us sanctions against Beijing is not simply an economic move, but a clash of two ideologies, cultural codes and models of civilisation. Agree?

— Aspect of the “clash of civilizations” is always present on the political agenda. But there are always nuances. In my opinion, Donald trump always raises questions of domestic policy in the first place in all their decisions.

Within American society serious contradictions, and trump wants to control the situation, translating this inter-civilizational conflict from sleep to active state. In my opinion, this is an artificial situation.

Similarly, the States at the time reacted to “the dominance of Japanese products”, and then the Japanese have become the best friends of the Americans in the East. In fact, the current China has nothing to share with the Western world: its development is quite in line with the “universal” economic values.

“SP”: — But why would trump, in your opinion, is so energetically pits the United States with major global players, from China to Russia?

Any leader needs the leverage for mobilizing society to solve those problems that the leader considers a priority. The creation of the “enemy image” of the neighbors-distant neighbors is one of the powerful tools. Although he is not without side effects.

Conflict with China is a conflict with a country without which the United States can not exist a day in the current economic reality. So the conflict is propaganda, not really. Seriously quarrel and stop trading is extremely profitable to both parties. Let me remind you that the prosperity of China began with the visit of Richard Nixon in 1972 and the restoration of diplomatic relations with the United States.

America has made a great contribution to China’s current prosperity. Therefore, the chosen is China. But Russia is another matter. We have with US is not such a serious interdependence. Therefore, the us conflict with Russia could have serious consequences. And with China — no, because both sides are struggling to try not to make a real fatal steps.

“SP”: — on the background of cooling relations with China U.S. politicians are increasingly in public speaking remember extremely painful for Beijing theme: respect for human rights and adherence to “democratic values”.

— As for “democratic values”, that is an example of the same Saudi Arabia which defiantly violates these values on a daily basis, but this does not prevent US to be friends with them. And personally, Trump including.

In General, the Arabs to the Europeans not in the best relations with for almost a thousand years, but this does not prevent the United States very loyal to individual members of the Arab world. For example, to the Saudis. Especially in the last 50 years. But these countries kept the Arab civilization of today. Syria, Egypt and Libya lost its position immediately after the collapse of the Soviet Union

China with the West, too, there is the abacus, but the Chinese, in contrast, the same Saudis, tend not to particularly stick out their claims. As for East Asia, the Singapore, Taiwan, Korea, Japan are already in the American friends of Vietnam had become a lot closer over the last ten years.

In General, in my opinion, the attempt to reduce everything to primitive xenophobia is simplistic, unworthy of a true expert. In life, you can build a policy based on such primitive things.