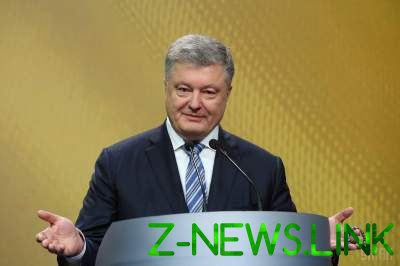 He also warned Zelensky from a meeting with Russian President Vladimir Putin.

Current President Petro Poroshenko has criticized the intention of the winner of the presidential election of Vladimir Zelensky to give the Russians of Ukrainian citizenship.

“We will never allow the possibility that we bought for gas. Because the important thing is that they are now trying to offer that in Ukraine cheaper gas”, – the President added.

“If you’re going to meet with Putin, you have more than one of the coalition war, which we carefully created 5 years, will not come, you destroy it. And leave Ukraine alone with the aggressor. And then you will only kneel and accept capitulation”, – said Poroshenko, adding that this should not happen.

“Timely show you how not to kneel, because we know how not to be. Timely prompt, as it is necessary to protect our allies and partners. Will promptly advise you how not to be sold for 30 pieces of silver gas-which is precisely deceived, we know that. Because even Bismarck said that agreements with Russia are not worth the paper on which they are written, read,” said he.

Poroshenko also said that he would sign the Parliament adopted the law “On ensuring the functioning of Ukrainian as the state language”.

“I am really proud that the law on the Ukrainian language will be the signature of Andriy Parubiy, which passes the law, and the signature Poroshenko that this law will sign it,” he said.

At the same time Poroshenko expressed regret that “after a law was passed about the language, the President-elect said he still thinks he has to sign or not.”