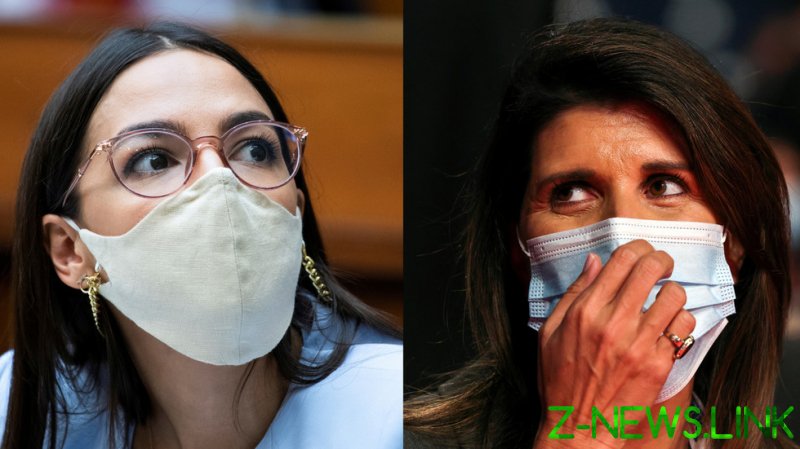 “To get the virus under control, we need to pay people to stay home,” tweeted Ocasio-Cortez, also known by her initials AOC, on Thursday.

“Are you suggesting you want to pay people to stay home from the money you take by defunding the police?” replied Nikki Haley, former Republican governor of South Carolina and the Trump administration’s first US envoy to the UN. “Or was that for the student debts you wanted to pay off, the Green New Deal or Medicare for All?” Haley added, referring to AOC’s other proposals.

Ocasio-Cortez quickly shot back that she wanted Republicans to “find the spine to stand up to their corporate donors” and vote for the Democrats’ HEROES Act, which supposedly doesn’t include a “Wall Street bailout” this time.

“And I know you’re confused [about] actual governance but police budgets are municipal, not federal,” she added as a parting shot.

Republicans have criticized the HEROES Act over what they say are billions in bailouts for Democrat-run states that would reward their governors for harsh lockdowns instead of helping people and businesses financially ruined by them.

Senator Kelly Loeffler (R-Georgia) also joined the fray, tweeting that “AOC wants to lock down our economy, lock the American people in their homes, and put the government in charge of every single part of our lives,” and leveraging the argument to campaign for her runoff in January.

AOC responded by accusing Loeffler of having no grounds for objecting to use of public funds, quoting a claim that she had “gifted yourself private jet on public dime & exploited corrupt tax loopholes to do it.”

Loeffler called the accusation a “some blatant lie to distract from your socialist shutdown” and brought up AOC’s own tax issues from last year.

While their respective fan bases relished the Twitter argument, it doesn’t seem to have persuaded anyone of the relative merits of any of the proposals involved.