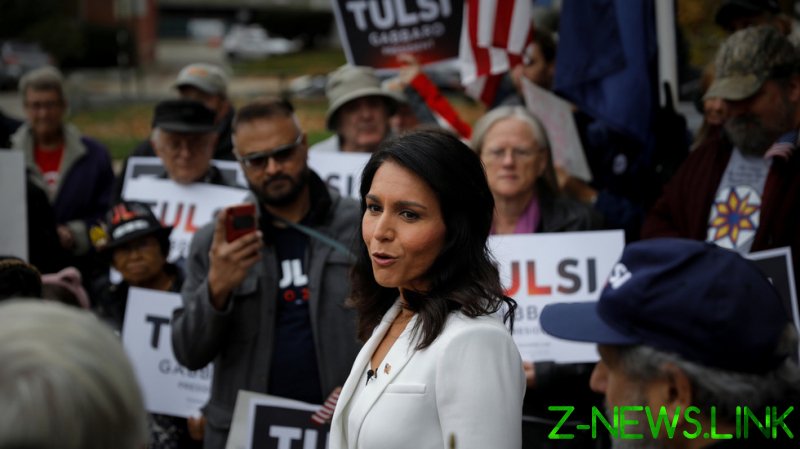 “It’s the height of hypocrisy for people who claim to be the champions of rights for women to deny the very biological existence of women,” Gabbard said on Monday night in an interview with Fox News host Tucker Carlson.

New guidelines introduced by House Speaker Nancy Pelosi on Friday and passed Monday by Congress in a party-line vote endeavor to “honor all gender identities” by making all pronouns and references to familial relationships gender-neutral. For instance, “seamen” has been changed to “seafarers,” and House rules have been scrubbed of such words as “father, mother, son, daughter, brother, sister.”“Aunt” and “uncle” will be replaced by “parent’s sibling.” Lawmakers also must inculcate such words as “parent-in-law,”“stepsibling” and “sibling’s child” to replace “mother-in-law,”“stepsister” and “niece.”“He” or “she” references to House members are instead “such member,”“delegate” or “resident commissioner.”

“It’s mind-blowing because it shows just how out of touch with reality and the struggles of everyday Americans people in Congress are,” Gabbard said. “Also, their first act as this new Congress could have been to make sure that elderly Americans are able to get the COVID vaccine now… , but instead of doing something that could actually help save people’s lives, they’re choosing instead to say, ‘Well, you can’t say mother of father in any of this congressional language.’ It’s astounding.”

Congress also has made permanent its Office of Diversity and now requires all committees to discuss in their oversight plans how they will address “inequities on the basis of race, color, ethnicity, religion, sex, sexual orientation, gender identity, disability, age or national origin.” Committees also must “survey the diversity of witness panels at committee hearings to ensure we are hearing from diverse groups of experts as we craft legislation.”

Gabbard, who didn’t seek a new term in Congress, was attacked as a “transphobe” and “bigot” after introducing a bill last month to limit participation in women’s sports to biological females. The movement to “deny the existence of biological women – it defies common sense, it defies basic, established science, it just doesn’t make any sense,” she told Carlson on Monday.

“No wonder they called you a Russian spy,” Carlson replied. “It’s dangerous to have you in the Democratic Party. I’m sorry you’re leaving [Congress].”

House Minority Leader Kevin McCarthy (R-California) was among the many Republicans who opposed Pelosi’s rules changes. “This is stupid,” he said. “Signed, a father, son and brother.”