Network laugh the wild action of the Communists in the Crimea 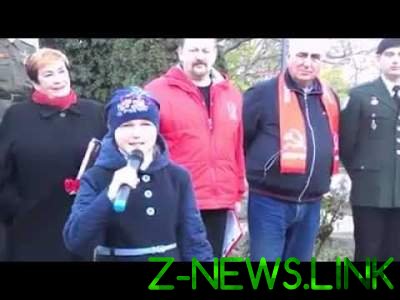 The Communists believe in the victory over the “Bandera”.

Communist party supporters held a rally in the Russian-occupied Sevastopol, laying the capsule at the monument “Courage, steadfastness, loyalty of the Komsomol” appeal to followers 2067.

According to media reports, the rally was attended by about 200 people. Among them were students. A few of them on the square took the pioneers.

“The war in Ukraine will end, will win the Bandera and the Ukrainian nationalism, as future generations will live in a socialist Russia,” said Communist party supporters at the rally.

In addition, a fragment of the event posted on the community page “& & 24” in Facebook.

“Liberated from Bandera, Sevastopol has risen to the very top,” he joked on the network.

See also:  "Crimea is ours": a resident of Sevastopol in the Pro-Ukrainian t-shirt conquered the network

“Handles twists, gesturing. Even without sound inspires(sound afraid to include) No worse than Trotsky. Right admired. There is a growing shift,” — commented on what he saw on the page.