Lee Camp: Why Biden’s choice to bomb outer space is so damn exciting 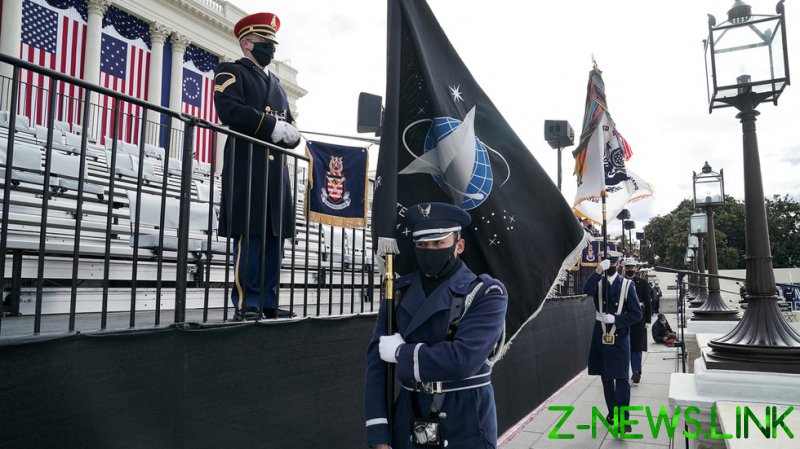 President Biden has announced he will be continuing to build Donald Trump’s Space Force — an idea Trump probably dreamed up while high on some bizarre pills his special “doctor” gave him and had left the rubber cement jar open on his desk. The Space Force is the new branch of our military designed to conquer and kill things in outer space. That might not be word-for-word from their mission statement, but I’d wager it’s close. Pretty sure their jackets say, “Let’s kill some shit in space.” And, let’s face it — we don’t know what’s in outer space. But whatever it is, we know it needs to be killed.

Before you ask — Yes, Space Force is exactly what humanity desperately needs right now. Having spent millions of years killing and conquering and torturing each other here on the terra firma, I think we’re all feeling kinda claustrophobic and bored. I think we all want to get out into the wide open infinite territory of the great and awesome cosmos and murder our fellow humans there, for a change. (If anyone’s wondering, the answer to the Fermi Paradox — Where are all the aliens? — is that all intelligent civilizations eventually develop the technology to kill themselves at the push of a button. Eventually someone, well, pushes the button. … His name is usually Tony.)

Space Force is also just the thing Americans need right now because our infrastructure is collapsing, our environment is struggling, our political system is only a half goose-step away from fascism, and our spiritual health is blinking red “ALERT.” Most of us can’t figure out a purpose for life other than just cleaning out the industrial pork-smasher in the back of Taco Bell. So considering how well things are going in this — the number one country on the planet — it’s time to expand to greener pastures (which are mostly pitch black). It’s time to expand into the Milky Way in order to grow our parasitic, deadly socioeconomic system. (I’m pretty sure MLK Jr. said something similar, not in a speech but in a diner in Tennessee.)

And think about it — ever since the maiden rocket escaped Earth’s atmosphere and explored space for the first time, most of the discussion, thought, preparation, and planning we’ve done has been… well… positive and cooperative. It’s almost exclusively been about discovery and exploration and science and knowledge. You know — all that wussy shit. We have not spent enough time really looking into how we can kill a lot of people from space. I mean, sure, our Pentagon has always had a few blueprints lying around that say, “Maybe we could shoot Russians with moon lasers,” but for the most part, we’ve had cooperation at the International Space Station, and we’ve celebrated space exploration as human beings rather than just stewing in fury that the Chinese achieved something or the Russians did something. Enough of this “Kumbaya let’s all live together in harmony” horseshit! I agree with Joe Biden — it’s high time we got into the killing mood.

We need more guns and bombs, and nuclear shit (strapped to robots, of course). That’s the only way we’ll achieve peace.

The nuclear weapons we have here on Earth would only allow for the full destruction of humanity a few hundred times over. A study found that if 100 nuclear weapons were used, the environmental destruction to the planet would be immense — wiping out most life, obviously including the countries who SHOT the weapons. All it would take is 100 nuclear bombs to truly ruin everything humans have ever known.

Yet, humanity now owns roughly 13,000 nukes (as the kids call them) — most of those are in the US and Russia.

I say “roughly 13,000” because who knows where EVERY nuclear bomb is. There’s probably a couple in some guy’s shed that he got from a yard sale outback a Waffle House in Quantico, VA. I mean, you can’t expect us to keep track of every single one. That requires paperwork and data entry. Who has the time?

Point being, we easily have enough nuclear bombs to kill humanity 150 times over, and Joe Biden’s actions make it clear that we need more. What if we wipe out life on Earth 150 times, and then want to keep going, huh? What then? You never know what mood we’ll be in at that point. I bet after watching several billion humans perish, you might be in a bit of a funk. And you might want a cigarette, a shot of strong whiskey, and to fire some nuclear fucking weapons! And maybe, just maybe, you want to fire them from space. And yet, if we don’t keep the Space Force going, you won’t be able to do that. And then how bummed will you be?!

It’s time for humanity to find bold new areas of the galaxy wherein to murder each other. For all we know, when you shoot someone on Venus their body explodes into a thousand shards of blood and flesh (which sounds awesome), but we haven’t tried it yet because we’ve been too stingy to devote the resources to getting it done. Now is the time for that scientific endeavor.

I have an idea. Maybe once we funnel even more funds into our new Space Force, we can bomb climate change into submission. Has anyone thought of that? It’s worth a try. You know what they say, “When your only tool is a hammer… every problem can totally be bombed!”

Point being, I want to say thank you, President Biden. Thank you for pushing us ever closer to extinction — in a unique and interesting way, you belligerent, warhawk, senile old bag of wrinkles.

Our government spends trillions upon trillions of dollars on various wars and war zones — recently adding outer space to the list — and meanwhile regular people, here on the ground, continue to suffer immensely.

One in three Americans had trouble paying their bills last year — but we’re sending guns to outer space.

Tens of millions have lost their employer-based health care coverage since the pandemic began — but we’re sending guns to outer space.

We can’t get vaccines and treatments to people who desperately need them during a pandemic — but we can get guns to outer space! …And at the end of the day, isn’t that all that matters?