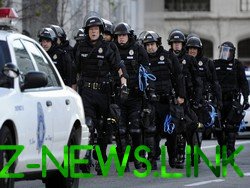 The prison guards threw black to the ground to cuff him, his cries did not respond and he died.

In the United States became aware of another incident with the black, causing the man died at the hands of prison guards. It is reported by CNN.

It is noted that the incident occurred on 2 December 2019.

According to the district attorney Forsyth, North Carolina, while in jail on charges of assaulting a woman, 56-year-old John Elliot Neville in a dream fell from the bed to the ground.

The guards found him “disoriented and confused” and decided to spend it in the infirmary. However, the man panicked and resisted. A few days after the events that happened after that, he died from suffocation.

After more than six months after the incident, a court decision was published video from wearable cameras the Rangers, who are given to understand realnuyu picture.

The 45-minute video of five people keeps Neville on the floor in the chamber. He is ordered not to stand, claiming that he had a seizure. The man yelling “Wait, give up, give up”, calling mom and asking for help. In the end, it still handcuffed and taken to the nurse where the man calms down.

But it starts again when it is taken back to the cell, where it again lay on the ground to remove the handcuffs. The Neville many times calling for help and repeating that he could not breathe. At some point he falls silent and stops moving. A few days later he died.

After the incident, the Prosecutor indicted five employees of the facility and the nurse of involuntary manslaughter. Now all of them are suspended from duty.

Post-mortem examination showed the cause of death is “complications of hypoxic ischemic brain injury from cardiac arrest due to positional and compression asphyxia during a prone hold”.

As you know, in may of this year, U.S. police roughly detained the African American George Floyd, and then he died.

Note also that in the state of Oklahoma in 2019 African American died after his arrest.