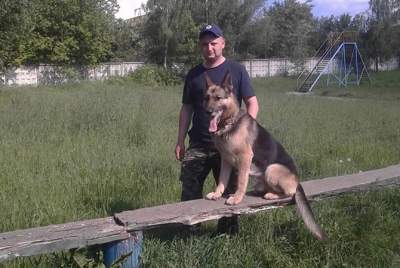 Series about service dogs reveals the incredible crime has always attracted spectators. That’s just all understand that in ordinary life this simply can not be. Say, where have you seen that dog pointed to the killer.

Proved police dog SEM from the Sumy region, which is just a half an hour uncovered a brutal murder.

It all started on a standard scheme: a call to the line 102 and the excited voice, they say, come soon, in one of the houses of the village Slout Glukhovski district a dead man.

In the place of immediately field investigators, together with the inspector-the cynologist Ivan kapelko and his tailed pupil – shepherd REM. Fortunately, the scene behind the house was a footprint the likely culprit is an important piece of evidence. The dog literally “took” a trace: the first took the house, came into the room, where he was killed, and then went outside through another door. There is a route handler and shepherd continued – they ran about a kilometer through the streets of the village, by public transport, shops, local schools and reached a nondescript residential building. Here Rema seemed to have changed, he began to whine and sat rooted to the spot near the gate in front of the house. The dog seemed to hinted that he should look back, and not lost.

– Our employees are interviewed 46-year-old owner of the house, and found that it may be involved in the death of a villager, says Glukhov, the head of the police Department Leonid Bibik. – The man confessed to the crime and told how it all happened.

It turned out that in the last week he was constantly drinking at the victim’s home. He lived alone, was fond of alcohol. At some point between the partners in the bottle there was a quarrel, and the guest, picking up a brick, hit the owner on the head, and then finished off with a shovel. The man immediately ran away and when I returned home, I carefully washed the shirt, on which were splashes of blood PAL. That’s the only alert service dog do not be fooled. For murder suspect threatens from 7 till 15 years of prison.

As for the main hero – tailed Pathfinder RAM, its canine – caregiver for a job well done gave a favorite food that always carries with him.

– REM already in dog years older – in the spring it will be nine years, – told “KP” in Ukraine” cynologist Ivan kapelko. The last 5-6 years dog no one did. He was sitting in a cage all day, missed you, missed work.

A little over a year ago the handsome Ivan noticed that the dog was not. Says because the dog decided to retrain. Prior to that, he served in the Ministry in another position, and sometimes came in the dog training centre to communicate with dogs.

– The handler that worked there, retired and this place offered me, – explained Ivan. – I decided to try it. When I saw the RAM, felt sorry for him. In General, the handlers have to “read” the dog. I saw that the dog has potential and it’ll work. He is very intelligent, but nobody wanted to admit. The dog wanted to cancel, I didn’t.

Mentor became involved with the SEM, and shortly caudate Commissioner opened the first offense, surprising the whole dog training centre. During his “retirement” track career, so to speak, after returning to work, the dog managed to find 65 sheep stolen, the car of the taxi driver pointed to the garage where there was a stolen bike.

– Shortly before the murder in the same village Slout, on the same street, lost man, – says Ivan kapelko. – REM responded to the call. The dog immediately picked up a trail and pointed to the road that leads to Shostka. No one paid attention, thought he lost the trail. Really missing and soon found in Shostka.

Good actually saving a service dog listens and respects his mentor. Both sincerely believe that will open more than one crime.