Home / business / In Russia, KAMAZ fell into the river: people cut off from civilization

In Russia, KAMAZ fell into the river: people cut off from civilization 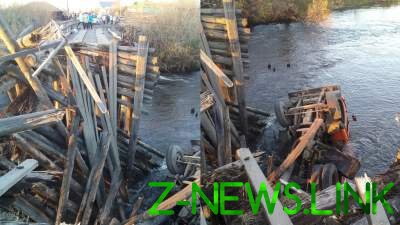 In the Sverdlovsk region of Russia a wooden bridge over the river Kakwa collapsed under loaded with gravel by the car “KAMAZ”.

Cut off from civilization were five families and a pregnant woman.

According to local newspaper “globe”, the incident occurred in the village Filkin, near the city of Serov. A wooden bridge could not withstand the weight of “KAMAZ” transporting 10 tons of rubble.

The driver was not injured, but the truck yet to pull out of the water failed.

Because of an emergency, cut off from civilization were two large families and a woman who must give birth in two weeks. Just on the right Bank of the kakva river left five families.

Now the two banks connect only two logs. One adult can take, the second to cross the river is dangerous. As a result, children today are unable to go to school and kindergarten.

Most residents are concerned that they will not be able to come to doctors when the woman comes time to give birth. Judging by the promises of the representatives of the administration, “fast” can get cut off in the village only in winter — by ice crossing.