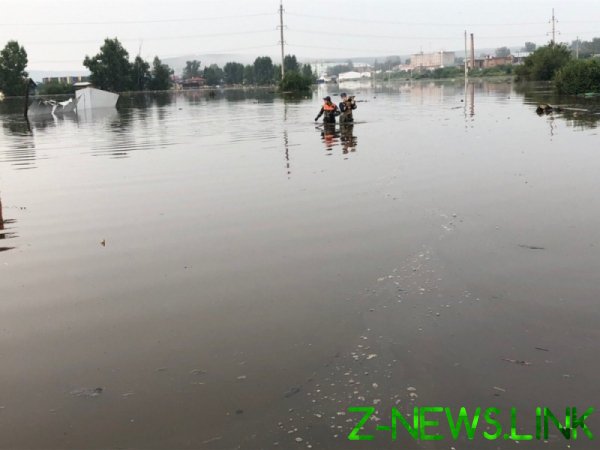 The head of the energy program of the Russian Department of Greenpeace, Vladimir Chuprov suggested that the new flooding in the Irkutsk region may be associated with forest fires raging in Siberia.

“Another flood in the Irkutsk region, now in the South, likely due to abnormal heat in the Krasnoyarsk region, in the North of Irkutsk region and other regions of Eastern and Western Siberia, which is now raging forest fires. The reason hot weather is the so-called blocking anticyclone — a huge mass of warm air that “lock” territory for the penetration of colder and moist air. As a result deposits, which were to shed the rain in the Krasnoyarsk region, comes in the form of abnormal rain on the periphery of the blocking anticyclone”, he said.

The Russian branch of Greenpeace also stated that, according to the Second assessment report of Roshydromet on climate change and its consequences on the territory of the Russian Federation, the frequency of blocking anticyclones increases.

“Climate change leads to unexpected and unpleasant consequences when we are drowning and burning at the same time. In order to avoid catastrophic scenarios, we need to reduce greenhouse gas emissions: to abandon the burning of oil coal gas to prevent fires, restore forest to change people’s habits related to wasteful use of the planet’s resources,” — said Chuprov.

According to Greenpeace, this season in Russia burned more than 12 million hectares of forest is larger than the area of Portugal or Slovakia and Croatia combined. The most powerful forest fires raging in the Irkutsk region, Krasnoyarsk region and Yakutia. The total area of natural fires in these regions reaches 3 million hectares.

Authorities do not extinguish fires in inaccessible areas, because the cost is higher than projected damage and the fire does not threaten settlements and infrastructure. Due to the catastrophic scale of forest fires, the state Duma called for the revision of the existing procedure of firefighting in the country. With this position agreed in the MOE. The Minister gave instructions to revise the relevant regulations of fire fighting. Earlier in social networks has launched a flash mob for the salvation of Siberia from fires. With the participation of famous musicians, bloggers and actors. Today it became known that the authorities of regions began to extinguish fires.

In the MOE say that, according to preliminary data, 131 village 16 districts of three regions of Russia there is considerable smoke. Respectively, around the three capitals of these regions of Yakutsk, Irkutsk and Krasnoyarsk — remains the most flammable atmosphere.

Meanwhile, Irkutsk oblast, in addition, is experiencing a second wave of floods. According to the regional Department of the emergencies Ministry, from July 27 due to heavy rains and rise of water level in rivers in the zone of flooding hit nizhneudinskiy, Cheremkhovo, Tulun, Shelekhov, Slyudyanka, Zima, Usolye, Zalarinskiy district. Just flooded 30 settlements, building 1801, with a population of 3965 persons, 13 sections of roads.