Modern smartphones Nokia, as we know, only fans of the brand – other things being equal, they often are more expensive than their closest competitors. In addition, in their table names it’s impossible not to get lost, and it also discourages consumers. 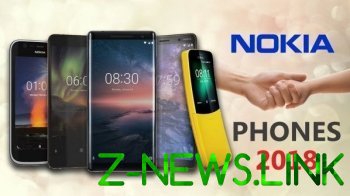 The management of the holding HMD Group, which owns the Nokia brand, decided to change the principles of naming, making it more simple and understandable. While it is unknown how it will be called Nokia smartphones a new generation, but according to insiders, they were divided into separate categories and sub-series, as is done at Samsung.

In other words, we are waiting for several separate families of smartphones, from the cheapest to the top, with a separate line of fashion models, such as Nokia 8 Sirocco. Mobile phones, apparently, the renaming will not affect modern Nokia operates a numeric 4-digit naming as Nokia original many years ago and it works perfectly. Apparently, the renamed Nokia smartphones will be released in the second half of this year.