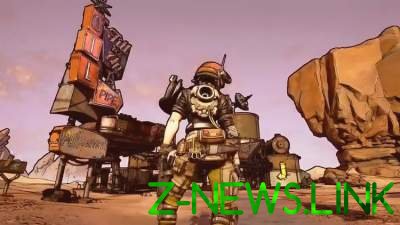 Gearbox working on new Borderlands is not a secret.

Company Gearbox Software has hinted at a full announcement expected cooperative action Borderlands 3. Tweet the developers have placed stylized in the spirit of Borderlands image of the sign to the motorway exit date (28 March) and the location: Boston, mA. For certainly no one had any doubt that the number of the exit the sign – 3.

This is an extremely transparent hint that during PAX East 2019, the company finally Borderlands 3 will demonstrate the General public. The event will be held March 28-31, and Gearbox has scheduled a presentation on Thursday, March 28, at 2 p.m. Eastern U.S. time. There promises to be surprises, exclusives and to make various announcements.

See also:  The organizing Committee of "Russian March" has reported about the refusal of the mayor of Moscow to coordinate action

Here’s the full official description of the upcoming presentation: “This is your opportunity to look behind the scenes of Gearbox Software Gearbox and Publishing, and learn the latest news and updates from the creators of Borderlands, Battleborn, and Brothers in Arms and other projects! We will have a completely new announcements, exclusives and surprises so don’t miss it!”.

Gearbox working on new Borderlands is not a secret. Gearbox President Randy Pitchford (Randy Pitchford) at PAX South 2015, said that the Studio is looking for new professionals who will help her in creating the next game in the series. And last year, Mr. Pitchford at PAX West said: “Our team is working on a project on which, I think, most of you, my friends, would like to we worked.”

See also:  Players Battlefield 1 will be covered by gifts

It has been over six years since released the last number of the series – Borderlands 2. Since then, Gearbox and its partners released a number of additions and branches, including Borderlands: The Pre-Sequel, Tales from the Borderlands and VR-version of Borderlands