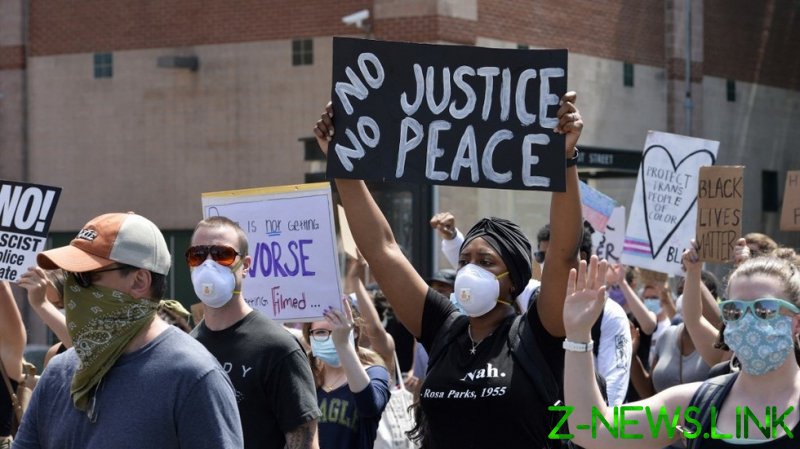 Some of their logic makes sense. Studying the population of Louisiana, one of the US’ most segregated states, the scientists found that African-Americans there were more than three times more likely to die of Covid-19 than whites last year, as they tend to live in crowded housing and work in ‘frontline’ occupations like nursing. They’re also more likely to be in prison or jail, where outbreaks can spread rapidly.

Some is woke hokum, like the idea that “structural racism, violently-seized privilege, and continuous trauma from racial terror and dehumanization” have helped the pathogen infect and kill them, and the notion that the target ‘R zero’ reproduction rate of the virus is somehow “symbolic violence,” a piece of mental gymnastics that one clearly needs a Harvard PhD to make sense of.

“Our study simply gives yet another example of how racism gets into people’s bodies and makes them sick, which can be added to this litany [of evidence for reparations],” study author Dr. Eugene Richardson told CNN.

The solution, the scientists declare, is to pay every single African-American in the US $250,000 as reparations for the enslavement of their ancestors, a move they say would lower infection rates by 31 to 68 percent. While such a princely sum would afford many the opportunity to avoid infection by living in better housing, avoid crime and incarceration, and training for better jobs than frontline ones, it would also cost $10.5 trillion nationwide, or half the US’ entire GDP and more than twice the federal government’s yearly budget.

By tying the fight against the coronavirus into the recently popularized concept of reparations, the Harvard team have guaranteed headlines for their study, and given the woke crowd another cudgel with which to beat poor old whitey. And the media is all over it, reporting the study’s findings in depth over the last couple of days.

However, in doing so they’ve ignored a literal elephant in the room. The study compared Covid deaths in Louisiana with those in South Korea, which was selected due to its relatively homogenized, egalitarian society. However, Korea is full of Koreans, and Louisiana is full of African-Americans. Korea has an obesity rate of four percent, while the African-American obesity rate in Louisiana stands at 42 percent, more than ten times that of South Korea.

Multiple studies have linked obesity with African-American Covid deaths and hospitalizations, including one specifically focused on Louisiana that found obesity to be “a significant determinant of disease severity in an African American population.” Regardless of race, obesity is a significant predictor of Covid severity, one noticed by doctors at the outset of the pandemic.

A quarter of a million dollars could probably help most people avoid infection, but lifting weights or going for a jog wouldn’t cost the taxpayer $10.5 trillion.

The Harvard team’s aim is clearly not disease prevention, but political agitation. The notion of what ‘racism’ is has evolved in recent years, and the word no longer describes the mistreatment of another based on their ethnicity, but an ever-present specter to which all the world’s ills can be attributed. It’s Orwell’s Emmanuel Goldstein, Pol Pot’s intellectualism, the Republican Party’s socialism. Invoking it generates rage and pats its supposed victims on the head, while nothing changes.

Reparations will probably never happen, at least not to the tune of $10.5 trillion, but in publishing the study, the Harvard scientists have signalled that they’re on the “right side of history,” to quote a beloved liberal affirmation. It’s worth noting too that the study justifies the existence of the Lancet Commission on Reparations and Redistributive Justice, whose researchers collaborated on it.

Back in the world of real science, the higher black mortality rate has also been attributed to vitamin D deficiency. Vitamin D deficiency has been linked to Covid-19 deaths broadly, with one study finding that patients deficient in this vitamin were nearly four times as likely to die from the coronavirus. In the US, black people are more likely to be vitamin D deficient, possibly due their darker skin color, which blocks the absorption of sunlight in northern latitudes. Furthermore, vitamin D deficiency is associated with obesity, from which more African Americans than whites suffer.

Taken individually, none of these studies provide a smoking gun explanation that precludes all others, but together they at least suggest a more likely explanation than “violently-seized privilege.”

However, “take some supplements” is a less sensational headline than “pay up, white devil.”

The media attention lavished on such hot-button takes draws attention away from scientific research that might actually help those in need. It also focuses debate away from concrete health interventions the government can take and onto pie-in-the-sky proposals, while absolving some people of any personal responsibility for improving their own health.

And after doing nothing to reverse the disproportionate death toll, they’ll still have the nerve to tell you that ‘Black Lives Matter.’