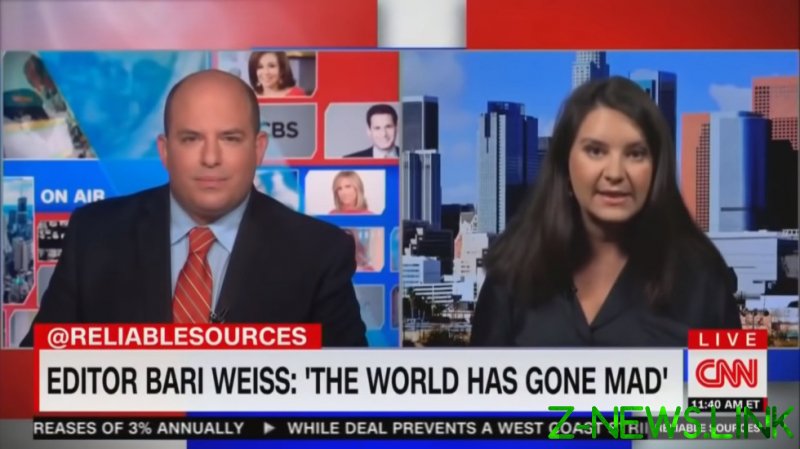 Weiss famously “self-canceled” in July 2020, resigning from the New York Times in protest over the sacking of an opinion editor at the behest of a Twitter mob. She has since set up shop on Substack and reinvested the proceeds into hiring a group of colleagues.

Appearing on Stelter’s ‘Reliable Sources’ show on Sunday, Weiss tried to explain how the “world has gone mad” with wokeness and cancel culture that lead to self-censorship both in the media and elsewhere.

Among the examples she quoted were the NY Times’ chief Covid-19 reporter calling it “racist” to investigate the lab leak theory; separating children by race in kindergarten and calling it progress; and not being allowed to condemn rioting, say there are differences between men and women, or say that the Hunter Biden laptop story is worth covering.

Stelter took exception to that, talking over Weiss to say he’d “heard about every story you mentioned” and that he could “find them everywhere,” before concluding that “people are allowed to cover whatever they want to cover.”

This got him a lot of flak on social media, with people who remembered CNN’s and his own conduct during the Hunter Biden laptop affair eager to remind him.

After that two-minute exchange, however, the conversation got a bit more civil. Podcast host Katie Herzog described it as “much more nuanced and interesting (and agreeable) than the clip going around.”

The full interview, almost seven minutes long, was shared on the web on Monday, and served as inspiration for a bit of media navel-gazing. Mediaite, which posted the video, said Weiss “confronted” Stelter. The conservative-leaning Federalist used it to say that Weiss “embarrassed” Stelter on his own show.

All of that made Weiss’s name trend on Twitter, which ever-so-helpfully editorialized that she’d argued CNN was censoring “more conservative viewpoints” – before deleting the “conservative” part at some point, presumably due to backlash.

Stelter himself felt the need to set the record straight, denouncing “snippets” of the interview and offering the full transcript and link to the podcast, where they talked for longer.

Weiss was trying to make a point she made in her recently published Commentary essay about the ‘Woke Revolution,’ that “canceling” people for “heretical” opinions or actions led to chilling conversations, shutting down thought and even self-censorship by journalists.

“You and I both know, there doesn’t need to be an edict from the C suite [executive offices] in order for people to feel that. All they need is to watch an example,” she told Stelter, laying out what she called “disinformation by omission” that is happening “in too much of the mainstream” media.