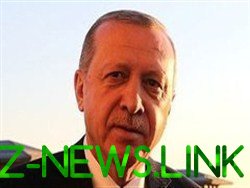 Turkey has never recognized and does not recognize the annexation of Crimea to Russia and supports the territorial integrity of Ukraine, said the Turkish leader Tayyip Erdogan at a joint press conference with his Ukrainian counterpart Vladimir Zelensky.

The Turkish leader also said that he hoped for a speedy end to the conflict in Eastern Ukraine.

“We support the Minsk process and the OSCE mission, which includes Turkish diplomats. Yesterday, we learned that in the East of Ukraine killed four soldiers. I offer condolences to the President of Ukraine and its people”, – quotes its words of RIA Novosti.

Zelensky in the framework of the visit to Ankara met with the Ukrainian and Crimean Tatar communities of Turkey and called on their representatives to return to the country to “develop their country”. He noted that the experience, knowledge, and important for Ukraine.