Discovered the most powerful evidence of the collision of galaxies 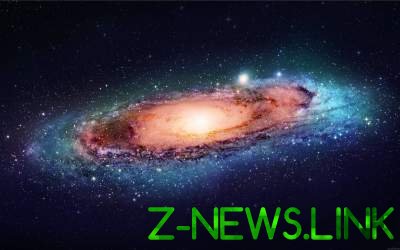 Scientists have noticed an emerging elliptical galaxy ADFS-27, which is about 50 times heavier than the milky Way.

An international team of astronomers have found evidence of the largest known to science the collision of galaxies. The study is published in the Astrophysical Journal, reports the national radio astronomy Observatory.

Scientists have noticed an emerging elliptical galaxy ADFS-27, which is about 50 times heavier than the milky Way. The object is located at a distance of 12.7 billion light-years from Earth in the constellation Dorado.

ADFS-27 is formed by the merger of two galaxies located at a distance of about 30 thousand light years apart and moving with relative velocity of hundreds of kilometers per second.

“Given their extremely large distance from Earth and the intensive star formation, perhaps we can become witnesses of the most powerful mergers of galaxies known to date,” — said co-author Dominic Ricers.

Experts believe that over time emerging ADFS-27 will attract other galaxies in their cluster.