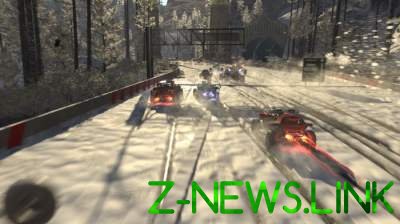 Onrush is the debut game Codemasters units in Cheshire, UK.

Last year, Sony shut down Evolution Studios — the team that gave the PlayStation exclusives like Motorstorm and Driveclub. Fortunately, the team quickly found shelter under the wing of Codemasters and again engaged in favourite business — races.

At Paris Games Week 2017 Codemasters announced the Onrush — crazy arcade game about destruction. According to the developers, the main thing in the game — not the pursuit of first place, and crazy stunts and juicy crash. Spectacular drive completes the scale Rush — it allows you to kerf ultimate ability to turn the iron horse into a projectile that destroys everything in its path.

Onrush is the debut game Codemasters units in Cheshire, UK. It was there and settled the former employees of Evolution Studios.

The race starts in the summer of 2018 on the PlayStation 4 and Xbox One. On Reddit, the representative Codemasters announced that the PC version will appear later. Supposedly, the former Evolution tend to work on consoles, so Onrush will come to them in the first place.

See also:  New trailer for the add-on "Waves of change" for Battlefield 1