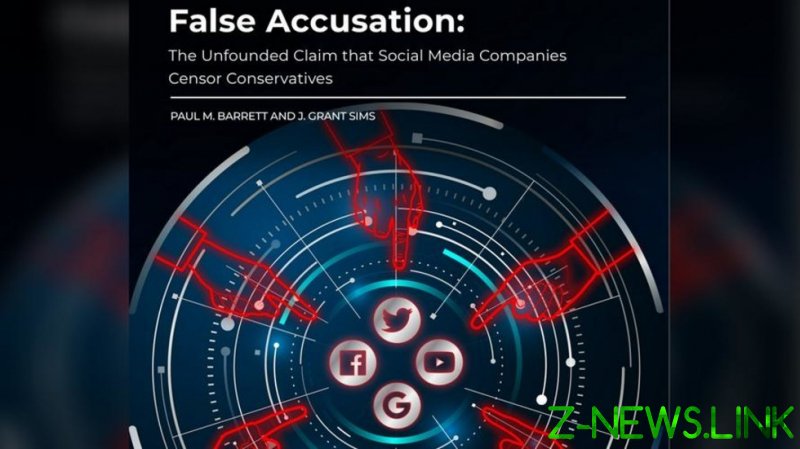 Twitter spokesman Nick Pacilio approvingly quoted the Washington Post story about a report arguing that the “claim of anti-conservative animus on the part of social media companies is itself a form of disinformation: a falsehood with no reliable evidence to support it.”

Nothing to see here, folks, just a former press secretary for Democrat Kamala Harris (it’s in his bio) retweeting a newspaper that openly endorsed the Biden-Harris ticket saying that Democrats are right and Republicans are wrong, right?

Before the “fact checkers” declare that actually, Pacilio was a spokesman for Harris in 2011-2014, when she was California’s attorney general – the point is that he doesn’t bother hiding his political allegiance, and neither does the Post. But it would be wrong to judge a report solely by the people who endorse it, so let’s take a look at it, shall we?

Authored by Paul M. Barrett, deputy director of Stern Center for Business and Human Rights at New York University (NYU) and research fellow J. Grant Sims, the 28-page paper is a regurgitation of talking points by mainstream media, “disinformation researchers” advocating for censorship under the guise of ‘Russiagate,’ and Big Tech companies themselves. Looking at their 74 endnotes, one finds multiple mentions of mainstream media outlets, but also citations of the Democrat propaganda shop Media Matters, the German Marshall Fund, and even the Biden-Harris campaign.

Any study of social media censorship that doesn’t address the New York Post getting locked out by Twitter and suppressed by Facebook over the story about Hunter Biden’s laptop in the run-up to the 2020 election is a farce. This report mentions it exactly once – in a “conservatives pounce” way, no less.

Describing the NY Post story as “questionable” and “apparently based on stolen emails,” the researchers claim it was a case of “reasonable decisions wrapped in mystifying processes.” Their conclusion mirrors the (footnoted) Washington Post editorial, literally headlined “Twitter and Facebook were right to suppress a Biden smear. But they should tell us why they did.” No bias here, everyone!

To no one’s surprise, the researchers conclude that platforms need a “content overseer” executive who would report directly to the top, and “do a better job of protecting users and society at large from harmful content.” They also want the Biden administration to either set up a new agency for digital oversight or give more power to existing ones, and reform Section 230 – the legal shield protecting platforms from lawsuits over content – to make it conditional on their censorship, or as they put it, “acceptance of a range of new responsibilities related to policing content.”

In other words, they literally want increased censorship on social media platforms, justified by the conservatives supposedly “falsely” claiming they’re being censored.

Now comes the best part. Among the people the authors thanked for their “time and insight” are representatives of Google, Twitter, and Facebook; two people from NewsGuard, a few Big Tech apologists from the neoliberal and neoconservative circles, a former Obama White House tech policy advisor – identified here by his new gig at Harvard Kennedy School – and Renée DiResta of the Stanford Internet Observatory.

DiResta has made herself quite a career at Stanford, producing alarmist reports of what Russia “might” do to harm American democracy or something, but she started out as research director at a shop called New Knowledge. This group of “tech specialists who lean Democratic,” to use a New York Times understatement, was literally caught running a false flag “Russian bot” operation on Twitter in 2017, during the US Senate special election in Alabama, in order to elect a Democrat.

Once the story of that broke – in December 2018, too late to change anything – New Knowledge quietly rebranded as Yonder, and that was it. No accountability. Instead of being disqualified as partisan hacks, the Senate Intelligence Committee doubled down on “insights” from New Knowledge/Yonder to insist there was “Russian meddling” in the 2016 election. DiResta simply moved to Stanford and kept doing the same thing.

Her inclusion is just the cherry on top of the giant hypocrisy cake that is the Barrett-Sims paper. It’s worse than merely factually wrong: it’s an exercise in gaslighting, projection and breath-taking dishonesty, it relies on self-serving and dishonest sources, and literally advocates for censorship. Whatever it takes to protect Our Democracy from “disinformation,” I guess.