Home / policy / Canada in the trade war against China

Canada in the trade war against China 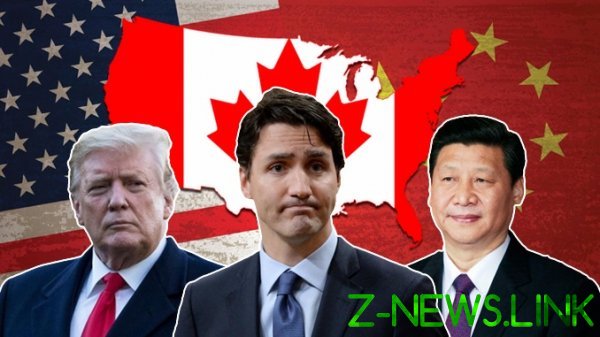 The conflict between the Chinese Huawei and the US government lasts more than 10 years only in the open phase.

In 2010, the U.S. Congress classified the core business of the IT giant as “dangerous for US national security“, especially in the territory of the United States.

In 2012, Huawei was prohibited from participating in mergers and acquisitions of U.S. companies.

The effectiveness of us sanctions can be assessed by several indicators, for clarity nominirovan them in the us currency. The starting capital of the company by the creation in 1987 amounted 5,000 (five thousand) dollars. From 2008 to 2018, revenue, Huawei has grown from 12 to 107 billion dollars. Annual investment in scientific and technological developments reached 13.8 billion dollars.

MAGA-the White house is only transferred the conflict to a new unstable orbit. Raising the stakes in the literal and figurative sense – on media, tariff, political and even legal direction, but with the fixed purpose to get China concessions financial and commercial nature. This goal was subordinated to the biggest arrest last year – the Vice-President of the Chinese Corporation in Vancouver.

01.12.2018 canadian police arrested a man Wanzhou Finance Director and native daughter of the founder, the owner and the permanent head of Huawei Technologies J. Jenvey. The arrest came on a warrant of the court of new York, under which the Chinese company is suspected in cooperation with Iran. The essence of the claims to M. Wanzhou varies from supplying Iran sanctioned goods (which is unknown) prior to the legalization of millions of Iranian (unknown why) and Bank fraud based on the publication of the Reuters news Agency in 2013 (?!!)

Ten days the Chinese authorities have relied on the prudence of canadian colleagues to get involved in another conflict in the obviously flawed conditions. Meng Wanzhou has not violated any canadian law or regulation, even Parking in the wrong place. Charges in its address range as the fabrication of charges. Her arrest was accompanied by numerous procedural irregularities and has all the features of the political order from the United States – and order extremely selfish towards Canada!

Of course, the representatives of Ottawa refuse to recognize their own servility. Talk about an independent justice system, the separation of powers and other idealistic mirages. However, the US government mouth three leading foreign persons refute their satellites, close geographically and intellectually minded.

Thus did the ancient generals – sending groups of light-armed infantry combat towards elephants. For any damage coming to the giants was worth more crushed lives. Doomed infantry recruited among the Union and the previously conquered tribes…

9 Dec 2018 canadian Ambassador to China has received an official statement of the Chinese government in unusually tough (as it later turned out – very thoughtful) formulations. The arrest of M. Wanzhou defined “ruthless, lawless, reckless and very vicious kidnapping with serious consequences for the canadian side in case of refusal to release a Chinese citizen“.

10 December 2018, two canadian arrested in China. They were charged with espionage, which involves prolonged investigation with the exception of bail.
The reaction of the canadian authorities was similar to the call to hit an armored elephant maple leaf.

The Prime Minister of Canada John. Trudeau called the arrest of compatriots “unforeseen consequences of a trade war between China and the United States…” Unexpected, really?! But if you got involved in a foreign war cannon fodder, then disastrous consequences should be taken into account!

The head of the canadian Ministry of foreign Affairs H. Freeland stated “the inability to revert the results of the suspect at us request“, it was supported by the Minister of justice. Although canadian law prohibits the extradition of a person whose alleged activity is not criminal in Canada and no canadian laws M. Wanzhou is not violated. Ministers warned China of the pressure on Canada, but the pressure was just beginning.

Career diplomats and former politicians of Canada warned their own leaders from suicidal vassalage.

25 January canadian Ambassador to China, noted that “the U.S. refusal to extradite the Vice-President of Huawei – option’s best for Canada“. The next day George. McCallum was fired at the insistence of Prime Minister Trudeau, the new one is still not assigned. As the Ambassador and the Prime Minister.

For the past months the Chinese authorities have banned the supply of canadian rapeseed oil (canola) and pork at hundreds of millions of dollars. Threatened a much more severe punishments for the abandonment of Chinese equipment for 5G networks in Canada and the failure has not happened. Ambassadors from both countries recalled the dialogue was suspended, and interstate relations in tatters. China stopped trying to communicate with politicians in Canada – what is the point to persuade forced the corps?!

One of the outcomes of the June G-20 summit in Osaka was the easing of U.S.-China trade rivalry and the return of company Huawei Technologies to the American market. Resumed the supply of components from United States for Huawei plants in China. Even with the restrictions and under close surveillance – but Canada remains to be seen over the broken trough of their own policies! No Western country had not joined the infantry hurriedly maple, did not show solidarity, did not help a strong case, or at least encouraging words.

We can only quote the former Prime Minister of Canada Jean chrétien: “the US played a cruel joke with us… we were forced to arrest a Chinese citizen, our farmers and meat producers threatened… you want to cancel the extradition to mend relations with Chinam…”

It is surprising activity of the active authorities of the developed canadian democracy, stuffing, bumps and abrasions on the rake of a foreign war dragging other people’s chestnuts benefit from someone else’s conflict flame with a grudge against their own burns.

Remains to recommend the current Prime Minister to remember what policies led his father Pierre Elliott Trudeau, Prime Minister of Canada from 1968 to 1979.
Trudeau Sr. sought to reduce dependence on U.S. military, political and economic terms, developed ties with the Soviet Union and established diplomatic relations with… people’s Republic of China! To this day he is revered as the most outstanding canadian statesman and is considered the “father of modern Canada”.

It remains to wish the speedy release of all the people involved in a politicized arrests. And to remind you about the simplicity of parting with food markets and difficulties in returning to them.
Russian pork producers are in talks about building up supplies in China.
The canadian representatives are afraid to ask an American “allies” to cancel the request to the deterioration of relations with China and therefore continue to incur losses legal, political, commercial and fashion in nature.

Forgetting that for a strategy MAGA canadian victims were, are and will be a tactical change in the Bank of American achievements.