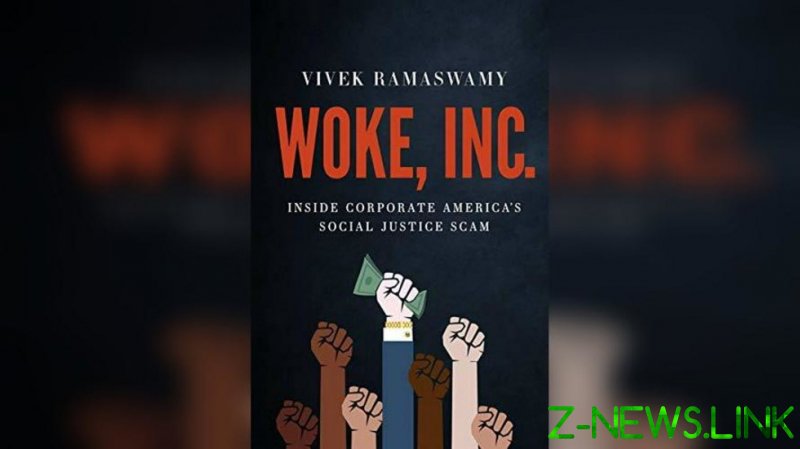 The idea was to twist the company’s slogan from “The best a man can get” to the “The best a man can be.” It sucked big time and hilariously backfired, causing huge reputational damage to the business, as customers turned their backs on this impossibly woke nonsense.

Having bought Gillette products for years, I have never bought them since and never will again.

It’s just the sort of incident that Vivek Ramaswamy explores in his forensically researched Woke Inc: Inside the Social Justice Scam, where paying lip-service to critical theories on race and gender has become a commercial imperative in the 21st century.

And it’s not just about consumer products and what they say about us, it’s about what we say and where we say it.

Ramaswamy looks at how mega-wealthy tech giants like Facebook, Twitter and Google feel that it is within their scope to not only determine who’s entitled to freedom of speech, but also what they should be saying. These are the same guys who banned the then-president of the United States from their social-media platforms.

A man duly elected to the most powerful post in the world was denied a voice because the unelected gazilionaires of northern California didn’t like what he stood for. It is irrelevant what you think of Donald Trump or his supporters, it is the principle of freedom of expression, encapsulated in the First Amendment of the US Constitution, that is being trampled-on here. And despite the absence of such a hallowed text in the UK or elsewhere, freedom of expression remains a cornerstone of any modern democracy.

Ramaswamy is certainly a bright button and knows business, law and the pharma industry inside out but it is his understanding of the privileges enjoyed by huge corporations which they cynically exploit to enhance their financial position that makes for the most damning reading.

In the US – and for the time being, in the UK and EU – social media companies are not considered publishers, in the legal sense, of any of the content on their platforms, so are immune from prosecution if someone goes rogue and defames a third party using their application. In another realm, however, wrongly accuse someone of being a paedophile in a newspaper and theoretically the complainant can sue the writer, editor, publisher and distributor into oblivion.

Implicitly, in return for that immunity, the US government expects those companies to honour freedom of expression. But that’s not how it works. Because these companies are acting just like publishers, editing content for their users, blocking what they don’t like, promoting what they do and obviously playing favourites so that people like Donald Trump are sacrificed on the altar of woke.

Any opinions that are out of step with woke orthodoxy, these companies believe, should not be heard. They are the new guardians of morality. The arbiters on all questions of racial justice, gender equality and how to fight climate change. And yet no one voted for them.

Ramaswamy nails this problem, highlighting the cynicism woven into woke corporate decisions, like the diesel emissions scandal at Volkswagen that was central to its deceit of being a super-green car manufacturer. He exposes the hypocrisy of the relatively recent phenomenon of stakeholder capitalism, where financial institutions insist on diversity in the boardroom or environmental, social justice and governance specifics before doing business, relegating maximising shareholder returns to a secondary consideration.

He also tackes diversity, which he says is not the diversity of thought that a healthy company needs, however, but is all about tokenism and meeting quotas based on people’s skin colour and sex, as if those characteristics define what they might think, and it’s a point well made.

With the understanding of a true corporate animal, Ramaswamy also looks at the rise of the management class, where CEOs can fund their own social-justice projects in the search for wealth and influence and can become less accountable by becoming more accountable. That means taking a corporation public so that, instead of a few deeply invested shareholders who might poke their noses into the business, the CEO can float the company and have many more shareholders, though none that are interested in how the company is run or what its boss has to say on Twitter about Black Lives Matter as long as it continues to turn a dividend.

It is through stakeholder capitalism and largely unaccountable CEOs of massive companies that we now hear these disproportionately loud voices on issues like race, gender and saving the planet, who have somehow managed to convince vast swaths of progressives that what they stand for is good and to side with them means you, too, can be part of their virtuous circle.  But this is all horribly wrong.

As Ramasamy says, “Anyone who sincerely cares about important causes like female empowerment, racial equality and environmentalism ought to be offended when these causes are cheapened by corporations that pawn them off to advance their own goals.”

That’s business in the 21st Century. Welcome to Woke Inc.