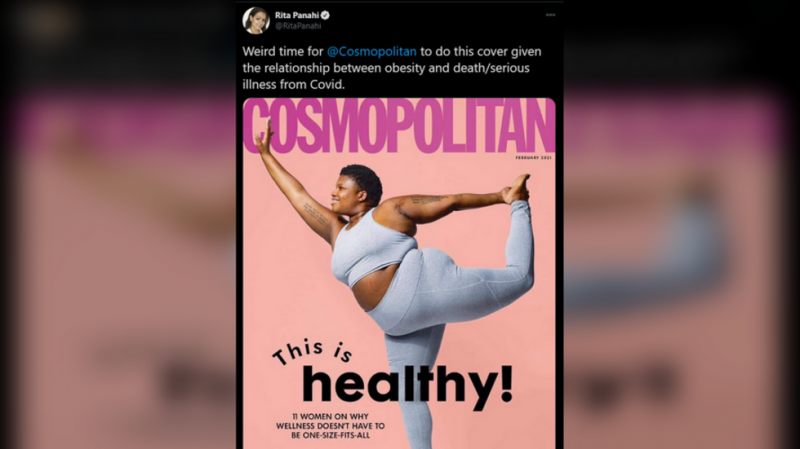 The publication ran a feature in which it photographed and interviewed 11 women who represented the different “sizes” of healthy.

“‘Healthy’ can be a loaded word. We asked these women to open up about their personal journeys to reclaim ‘healthy’ as their own,” Cosmo explained. One of the women, social media influencer, Callie Thorpe, told the magazine she focuses on what her body can “do” rather than how it “looks.” Echoing similar sentiments, yoga teacher Jessamyn Stanley said she has embraced her body size and has learned to tune out “fatphobic comments” on social media.

Twitter users responding to the feature didn’t appear to be particularly sympathetic, however.

“This is how the left has warped so many minds: we’re told if we fail to *celebrate* obesity it means we *hate* obese people,” noted one reply.

Another disapproving commenter pointed to how Cosmopolitan’s idea of “healthy” has radically changed over the years, and shared an old issue of the magazine that was dedicated to “health and happiness” featuring actress Audrey Hepburn.

The contention that there’s nothing unhealthy about being overweight is not just wrong, but also irresponsible, others argued.

“Why is Cosmopolitan trying to kill obese people, who are particularly vulnerable to Covid?” asked conservative pundit Ian Miles Cheong.

Obesity has been found to increase the risk of severe Covid-19 symptoms and impair the body’s ability to create antibodies, making overweight people more susceptible to mutations of the virus. Notably, a paper published in July concluded that obesity was the most common comorbidity among Covid-linked deaths.

This isn’t the first time Cosmo has taken flak for celebrating plus-sized bodies. In 2018, its cover featured an obese model, Tess Holliday. It was widely criticized for promoting an unhealthy lifestyle. The American model was unapologetic for her appearance in the issue, and lashed out at the “horrible people” who were “whining about how me being on the cover of a glossy magazine impacts your small-minded life.”