Home / Incident / Accident in Kyiv region: the foreign car has turned into a pile of scrap metal

Accident in Kyiv region: the foreign car has turned into a pile of scrap metal 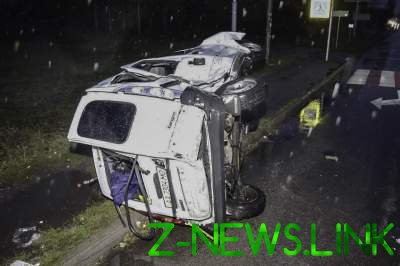 Sunday, October 8, the accident occurred at the Obukhov track. Renault Kenga skidded on the turn, after which his side crashed to a Volkswagen Passat.

Due to the collision the Frenchman was left lying on the side of the track, and “German” — to stand in the middle of the road. He had completely broken the front part.

Both drivers move in the Volkswagen, where he began to write explanations. Later they were transferred to car patrol police.

The crash injured two persons – passengers of Volkswagen. They have a mild injury, but they were sent to the Obukhov hospital. Both drivers remained unharmed.

At the scene of traffic jams formed. Patrol reported that the culprit only to find out.